The Serb, 31, quickly took control to win the opening set in 29 minutes, breaking twice more in the second set.

Djokovic saw off five set points in an even third set before dominating the tie-break to seal victory.

He dropped to his haunches just inside the baseline as Centre Court rose to acclaim the champion, hugging South African Anderson at the net before skipping over towards his box and celebrating wildly in front of his coaching team and wife Jelena.

"There is no better place to make a comeback, it's a sacred place for the world of tennis, it's very special."

He is now in outright fourth place on the all-time list of Grand Slam men's singles titles, moving clear of Roy Emerson and closing the gap on Roger Federer (20), Rafael Nadal (17) and Pete Sampras (14).

The former world number one will move back into the top 10 when the latest rankings are released on Monday.

It is his first title since winning Eastbourne last year.

Djokovic back to his Slam-winning best

Djokovic dominated the men's game earlier this decade, holding the number one ranking for 223 weeks and completing a career Grand Slam when he claimed the title at Roland Garros two years ago.

Then, his cloak of invincibility began to slip.

After losing to Sam Querrey in the third round of Wimbledon in 2016, Djokovic alluded to difficulties in his personal life and his form subsequently tailed off.

Fitness also became an issue, taking two spells away from the ATP Tour because of an elbow injury, leading to him dropping out of the world's top 20 earlier this year for the first time since 2006.

Now he is back among the world's elite after a wonderful Wimbledon.

Djokovic broke twice in each of the opening two sets, dismantling 6ft 8in Anderson's service game and grinding him down in the rallies.

Anderson rarely ventured forward and offered little variation - until the third set at least - but Djokovic nullified the increased threat to win in two hours and 18 minutes.

While Djokovic's troubles have been well documented, eighth seed Anderson has enjoyed his own renaissance in the past 12 months.

The 32-year-old cracked the world's top 10 for the first time towards the end of 2015, but faced a catalogue of injury problems during 2016 and dropped towards the foot of the top 100 as a result.

However, he has battled back to reach two Grand Slam finals and a top-five ranking over the past 18 months.

While reaching last year's US Open final showed he possesses an all-round game, Anderson's biggest weapon remains his serve - which he lost in the opening game against Djokovic with a double fault on break point.

Anderson struggled to find his rhythm and movement in a slow start, unsurprising after spending almost 11 hours on court in his previous two matches, and lost serve again in the fifth game.

While Roger Federer and John Isner eventually succumbed in those marathon quarter-final and semi-final matches, Djokovic was always going to be a tougher opponent to crack with the Serb regarded by many as the best returner in the game's history.

Of course, Djokovic also had a lengthy semi-final against Rafael Nadal but he did not look like he had returned to Centre Court without the benefit of a day off.

After taking the opener, Djokovic continued to wear down Anderson and, helped by some unforced errors from the South African's racquet, broke again in the first game of the second set.

Djokovic moved 4-1 ahead before Anderson finally started to ask questions of Djokovic's serve, missing his first break point in what proved to be the final game of the second set.

Anderson rarely ventured forward in the opening two sets, coming to the net on seven occasions, before changing tack and making 14 approaches in the final set alone.

It contributed to an even third set as both men dominated their service games until Anderson earned another break point in the eighth game - the first of the set - with the help of the net cord.

Djokovic cranked up the tempo, landing a first serve to see off the break point, only to offer up two set points in the 10th game with two double faults.

He managed to save both, despite many on Centre Court cheering when they thought he had hit a forehand long on the first, going on to hold for 5-5 and greeting the winning point with a huge roar towards the crowd.

Djokovic's next service game also came under pressure as Anderson could not convert three further set points - and his failure to do so proved costly.

Djokovic raced 4-1 ahead in the tie-break, earning four championship points when Anderson dumped a forehand into the net.

The South African saved the first with a smash, but was powerless to save the second as Djokovic hit a first serve down the middle which could only be returned into the net.

"I am definitely not feeling as fresh as I was coming into the week," smiled Anderson.

"But I'd have given another 21 hours to have the opportunity to play out here, it really meant a lot to me."

Djokovic is super-fit, very dedicated. He studies the history books, he knows Nadal and Federer have more Grand Slams though he won't talk about it. He can play for two or three years more years and win a few more majors.

When you reflect on Anderson's last three matches, he had to play the match of his life against Federer from two sets down.

Then he has to play the new match of his life against Isner. Then to come back on finals day to beat Djokovic is a step too far.

He showed guts and determination, he hung in there and created opportunities. If he could have got the third set there might have been a second wind. 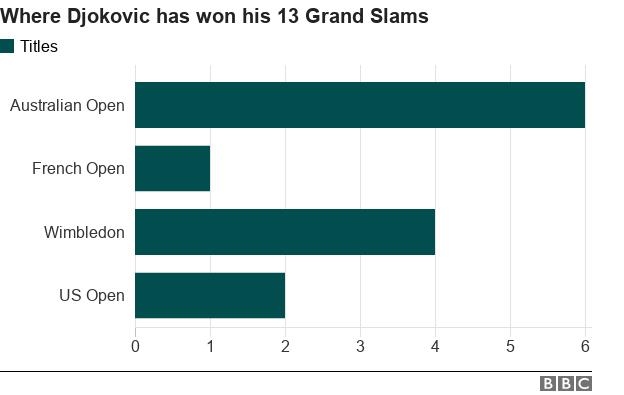