Novak Djokovic says he has "not much to lose" when he goes for his first Grand Slam title in almost two years against Kevin Anderson in the Wimbledon final.

Djokovic, 31, has won 12 majors but has struggled for form and fitness since claiming the 2016 French Open.

South African Anderson, 32, is bidding to win his first Slam after losing to Rafael Nadal in the 2017 US Open final.

"Considering he's playing only his second Grand Slam final, obviously he has a lot more to gain," said Djokovic.

"If I take my last couple years, I don't have much to lose myself."

The Serb dominated the men's game earlier this decade, holding the number one ranking for 223 weeks and completing a career Grand Slam when he claimed the title at Roland Garros two years ago.

But he dropped out of the world's top 20 earlier this year - for the first time since 2006 - as he returned to action after elbow surgery.

"It makes it even better for me, makes it even more special because I managed to overcome challenges and obstacles, to get myself to the final of a Slam," he said.

"Obviously if you told me that six months ago, I would take it right away."

The final begins at 14:00 BST on Sunday and will be live on BBC One, BBC Radio 5 live and the BBC Sport website.

Both men go into the final on the back of gruelling semi-finals during which they spent a combined total of almost 12 hours on court.

That meant Djokovic's last-four match against long-time rival Rafael Nadal did not start until 20:00 BST on Friday, resuming on Saturday when the Serb completed a five-set win after five hours and 16 minutes on court.

Anderson has the benefit of a day off between the semi-finals and the final, a break Djokovic describes as "necessary".

Temperatures are expected to reach about 30C at Wimbledon on Sunday.

"I wish I can have a day. But it is what it is. I'll just have to accept the circumstances and try to recover as best as I can," said Djokovic.

Speaking after his semi-final, Anderson said it was "not going to be easy" to play again so soon after an exhausting match.

"Obviously I'd like to have been done a little bit earlier in terms of my recovery, playing against one of the greatest players of all time," he said.

"But when you're planning, you're scheduling, you're second on after 1pm, you don't think you're getting on at 8pm. It's tough on them too." 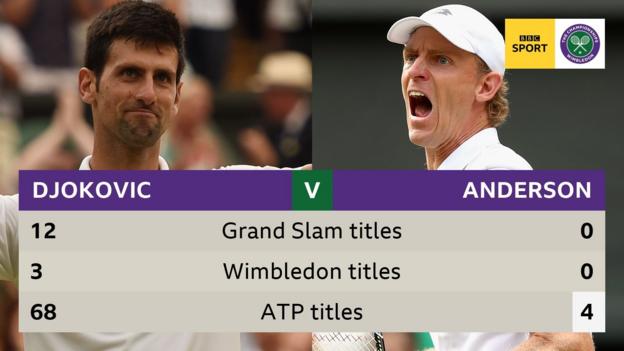 Djokovic has won three Wimbledon titles - in 2011, 2014 and 2015 - but came into the Championships as the 12th seed on the back of a frustrating year blighted by an elbow injury.

After reaching the Queen's final, he worked his way through the draw with increasing assurance and appeared to confirm he is back to his best with victory over Nadal in the last four.

However, he says he is unsure whether he can described as the favourite to beat Anderson.

"I think we're quite even. He's definitely playing the tennis of his life," said Djokovic.

"He's coming off from two epic marathon five-set wins. I don't think he has much to lose really. He's going to come out with big serves and big tennis.

"Hopefully I'll be able to weather the storm. We want this match, both of us."

How Djokovic reached the final 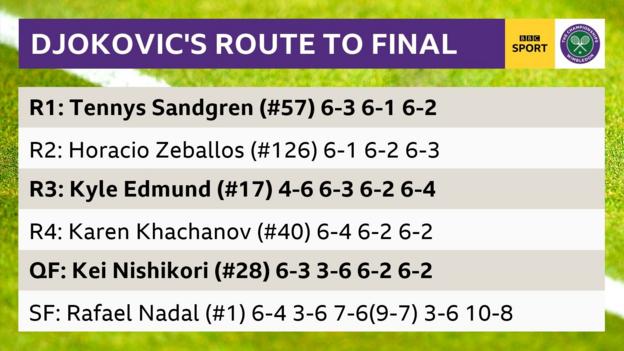 How Anderson reached the final 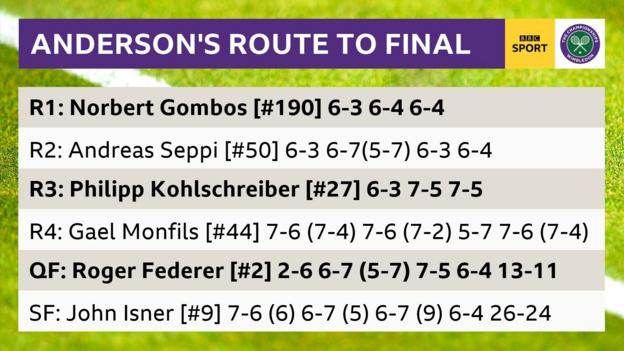 Turning 30 is no barrier - game, set and stats