Rafael Nadal and Novak Djokovic have met more than any other two men in the Open era - and the pair are ready to finally resume their long-standing rivalry on the Grand Slam stage.

Nadal, 32, and Djokovic, 31, meet in a highly anticipated Wimbledon semi-final later on Friday.

They have faced each other 51 times, but not as deep into a Slam since the 2014 French Open final.

The winner will play either John Isner or Kevin Anderson in Sunday's final.

Spain's Nadal and Serbia's Djokovic have won 29 Grand Slam titles between them, including five previous victories at SW19.

The pair have only met twice at Wimbledon, Nadal winning their 2007 semi-final when Djokovic retired hurt, the Serb gaining revenge in the 2011 final.

"There is no one other match in the history of tennis that has been played more than our match. That's a big thing," said second seed Nadal. 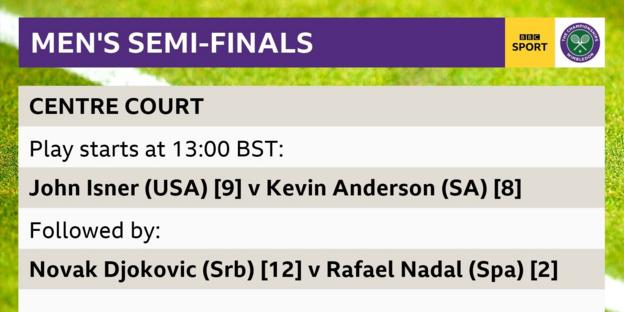 The most enduring rivalry

The pair have produced some of the greatest matches ever seen - which include memorable Grand Slam finals and career-defining victories.

They have met in:

Djokovic leads 26-25 in their head-to-head, dominating in recent times with seven victories in the past nine matches.

"It is always a big challenge facing Novak," said Nadal.

"He is one of the more complex players that I ever saw in our sport. It is always a big test.

"You know that you can't win against him if you don't play very well."

How Djokovic reached the semi-finals

Djokovic came into the Championships on the back of a frustrating year which was blighted by an elbow injury and saw him slide down the world rankings as a result.

He showed signs of recovering at the French Open before a shock loss in the quarter-finals against unseeded Italian Marco Cecchinato, then reached the Queen's final where more mental fragility proved his undoing against Marin Cilic.

However, the 12th seed has looked focused and close to his best form on his way to reaching a first Slam semi-final since the 2016 US Open.

"I'm really not thinking about being an underdog or being a favourite," he said.

"I just try to build the momentum. Obviously I've been very pleased with the way I've played so far on the grass court season." 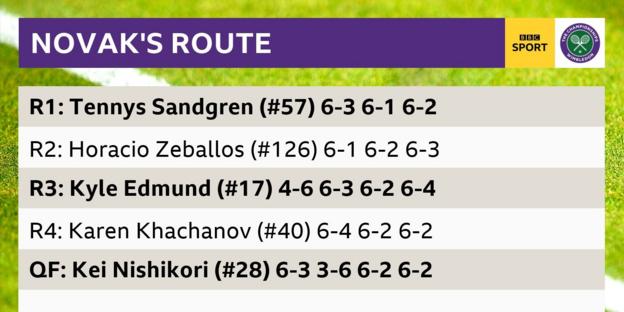 How Nadal reached the semi-finals

After a hectic clay-court season where he won the Monte Carlo, Rome and French Open titles, Nadal decided to go into Wimbledon without playing a warm-up event on grass for the second year running.

The Majorcan, who is the world number one but seeded second at Wimbledon, looked refreshed as he breezed through his opening four matches without dropping a set.

None of his opening four opponents were ranked inside the world top 50, meaning he faced a huge jump in class against world number four Juan Martin del Potro in Wednesday's semi-final.

Nadal was two sets to one down before fighting back to win in five sets - and almost five hours - to reach his first SW19 semi-final since 2011. 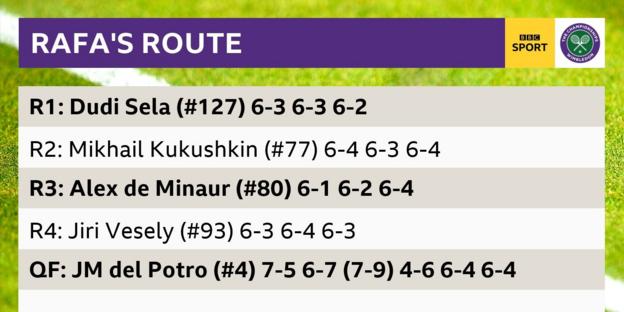 Three of the best Nadal-Djokovic matches

A match which has gone down in the record books as the longest Grand Slam final, lasting five hours and 53 minutes - and finishing at 1.37am - before Djokovic prevailed.

After seven weeks out with a serious knee injury, many doubted if Nadal would regain his crown as the 'King of Clay'. Playing Djokovic was the sternest test and he came through a dramatic five-setter dubbed the greatest clay-court match of all-time by Bjorn Borg and John McEnroe.

Djokovic came close to beating Nadal for the first time on clay, only to see the Spaniard save three match points before winning one of the greatest and - at four hours and two minutes - longest three-set matches in history.

While Nadal and Djokovic are old hands at winning Slams, the man stood on the opposite side of the net in Sunday's final will be bidding to win a first major.

South African eighth seed Anderson, 32, has reached a major final before, losing to Nadal in last year's US Open showpiece.

He reached a first Wimbledon semi-final by beating eight-time champion Roger Federer on Wednesday, fighting back from two sets down to earn the biggest win of his career.

"I said at the beginning of the tournament, getting through to the quarters was a big goal of mine," he said.

"But also putting myself in these positions where hopefully I'm able to get another step forward and be playing on Sunday."

Isner, 33, will be playing in his first major semi-final and is bidding to become the first American man to reach a Slam final since Andy Roddick finished Wimbledon runner-up in 2009.

"I'm very, very happy to be in this position right now," said the ninth seed, who has never played on Centre Court at Wimbledon - although he did so against Federer at the 2012 Olympics.

"With how I'm feeling physically and mentally, I'm in a very good spot. I think I can keep doing damage here."