Six days gone, seven to go - many seeds have fallen but the queen and king of Wimbledon remain standing.

Between them Roger Federer and Serena Williams have made it into the second week 31 times in total - and going by their form so far they both look a good bet to go all the way.

Add to the mix Federer's old foes, Novak Djokovic and Rafael Nadal, and you still have a strong men's competition.

However, only Karolina Pliskova remains among the top 10 players in the women's tournament.

Elsewhere, there are no Britons in the second week for the first time since 2007, with the two main hopes Kyle Edmund and Johanna Konta dumped out at the third and second-round stage respectively.

BBC Sport takes a look at the state of play at Wimbledon 2018 so far.

Federer looking better than ever - nailed on to defend his title?

The superlatives keep getting recycled for the Swiss player, who at the age of 36 seems to be enjoying a prolonged Indian summer.

It has been three matches and three easy wins so far this tournament, and the number one seed remains a short favourite to win his ninth title.

With the early departure of number three seed Marin Cilic and three-time Grand Slam winner Stanislas Wawrinka, the tennis great's side of the draw has opened up.

"After 22nd seed Adrian Mannarino, there's the big-serving Kevin Anderson, or there's the South African's opponent Gael Monfils, who can provide excitement and seems to be playing at his best," said the 59-year-old three-time champion.

"And in the semi-finals, he [Federer] could face John Isner, another player you cannot discount because of the way he serves, or maybe Milos Raonic, who would be the guy to take the racquet out of the hand."

Serena easing back into elite as top seeds fall?

There were question marks over how the seven-time Wimbledon champion would perform on her return "home".

Williams only started competing again in singles in March after more than a year out during which she gave birth to her first child.

Then there was the chest muscle injury she suffered at the French Open prior to her fourth-round match against Maria Sharapova.

But she has navigated through three matches here without dropping a set, and according to former American tennis player Chanda Rubin, Williams is getting stronger by each round.

"Williams appears to be physically OK, and worryingly for her rivals we are starting to see that big serve," the 42-year-old former world number six told BBC Sport.

"Going into the second week, I think Serena has as good a shot as anyone to win this event, which is crazy to think.

"The last-32 match against Kristina Mladenovic was tricky, but she was able to come through it like she's been playing all year. It was remarkable."

French player Mladenovic later posted on Instagram her thoughts about Williams: "You are definitely a different league than anyone else."

Next up for the 36-year-old American is Russian world number 120 Evgeniya Rodina - they meet for the first time.

Can Djokovic go all the way? 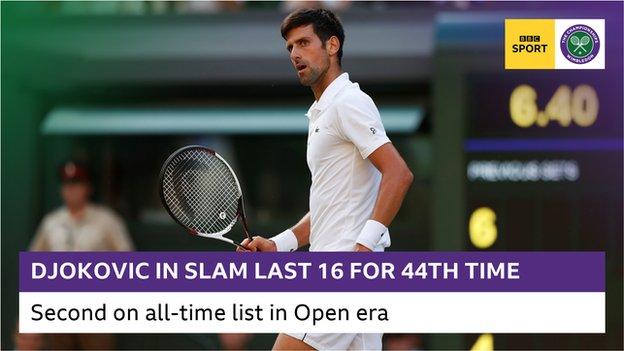 Could Wimbledon mark the renaissance of the 31-year-old three-time champion?

But during Saturday's victory against Britain's sole remaining competitor in the singles, Edmund, he showed glimpses of his best form.

The Serb went a set down and saw an umpire call go against him when he had break point in the fourth set, but still came through.

"I think this is admirable from Djokovic," added McEnroe. "He kept his cool because it could have gone south really quickly. He has worked hard to keep his game up. This is why people feel he is a threat and getting closer to his best.

"I've been a bit surprised his comeback has been [staccato]. There were physical and mental issues - but this has now been two years [since he won a Slam]. It'll be nice to see him do his thing in the way we are accustomed to."

No Brits left - how significant is that?

Not too significant, according to former British women's number one Sam Smith.

The 46-year-old said there is more to be excited about than downhearted.

"I was impressed with Harriet Dart, who had Pliskova on the ropes - a player who could end up as champion," she told BBC Sport.

"Then there was Katie Boulter, Katie Swan and Gabby Taylor. A lot didn't think Konta played very well during her loss, but the display by Dominika Cibulkova - you won't see too many better on the Centre Court this year.

"I was impressed with Jay Clarke in the men's competition, and then there's Edmund, of course. Some of the guys lost because they lacked experience in big-match play.