There were more shock exits in the women's singles draw on day five at Wimbledon.

But elsewhere Nick Kyrgios still grabbed the headlines, Roger Federer and Serena Williams continued to dominate on Centre Court and there was a three-day, five-hour, five-set thriller involving two Britons in the men's doubles.

Whatever Germany's Jan-Lennard Struff threw at him, he had an answer and it was in typically emphatic fashion that he made it through to round four with a 6-3 7-5 6-2 win on Centre Court.

The defending champion needed just one hour and 34 minutes to win - a much easier ride than his next opponent Adrian Mannarino, who had to come from behind in the fifth set to make it through to the last 16.

The Swiss has still not even dropped a set at Wimbledon this year - extending his winning streak to 29 in a row - and he looks full of energy.

Venus the latest star to fall

Five-time Wimbledon champion Venus Williams was the biggest casualty on another tough day for the seeded players.

Eight of the top 10 seeds in the women's singles have now failed to make it through to the last 16.

"Some of it is players not having a plan B, or plan C," former Australian Open semi-finalist Chanda Rubin told BBC Sport.

"You have to somehow find a way to win on those days when you are not at your best and some of the top players just haven't been able to do that."

Williams' fellow American Madison Keys, 23, also exited after an erratic 7-5 5-7 6-4 loss to Russian qualifier Evgeniya Rodina who is ranked 120th in the world.

Romanian Mihaela Buzarnescu fought back the tears as she lost 3-6 7-6 (7-3) 6-1 to Czech seventh seed Karolina Pliskova.

While many around her are falling, Serena Williams is only growing in stature.

She came through her first proper test against France's Kristina Mladenovic 7-5 7-6 (7-2) despite going a break down in the first set.

The 23-time Grand Slam champions still hasn't dropped a set and with eight of the top 10 women's seeds now out, the road is clearing rapidly towards an eighth Wimbledon title.

"Just getting to the round of 16 twice is not bad. Hopefully I can do a little bit better," she said. "I don't have anything to lose. I have absolutely nothing to prove."

Britons come out on wrong side of 42-game final set

With only one home player left in action in the singles draws, attentions turned to the doubles, where eight Britons made it through.

Jay Clarke and Cameron Norrie did not but they were involved in an epic five-hour battle on court 14 against first-round opponents Marcelo Arevalo and Hans Podlipnik-Castillo.

The match began on Wednesday and was suspended with the Britons 3-2 up in the first set because of rain. It resumed on Thursday but bad light forced another stoppage with Clarke and Norrie two sets to one up and leading 4-6 7-6 (7-5) 7-5 4-3.

Arevalo and Podlipnik-Castillo bounced back to take the fourth set 6-4 on Friday. The players tussled back and forth in the fifth and final set, before Clarke and Norrie lost it 22-20 in front of a highly entertained crowd.

It was the first time the two Britons were playing together at a Grand Slam after they were handed a wildcard to compete in the men's doubles - and it was certainly a match to remember.

Kyrgios at the centre of it all again 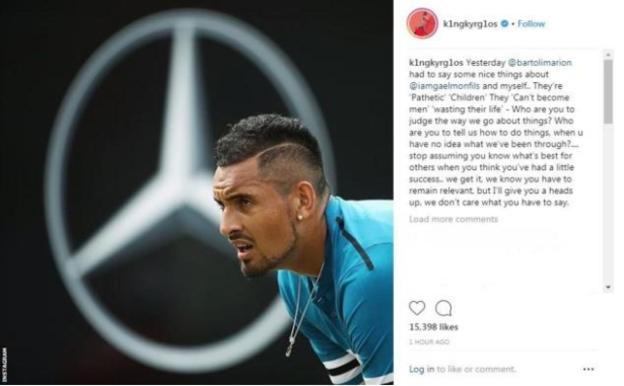 Kyrgios has already caused controversy at this year's Wimbledon championships and he did so again on Friday without even lifting a racquet.

After getting caught up in two exchanges with umpire James Keothavong on Thursday, receiving a code violation for inappropriate language, the Australian 15th seed has now caused further sparks with his social media use.

He went on Instagram to respond to criticism from 2013 champion Marion Bartoli after she said he was "childish" and lacks "work ethic" on Radio 5 live on Thursday.

Kyrgios asked Bartoli to "stop assuming you know what's best for others" in a lengthy post which he signed off with the words: "we don't care what you have to say".

He faces Japan's Kei Nishikori in the third match on Court One on Saturday.