Two-time champion Andy Murray says he is "most likely" to play Wimbledon next week as he continues his comeback from almost a year out with a hip injury.

Murray, 31, has been drawn against Frenchman Benoit Paire in the first round of the Championships, which start on Monday.

In the women's singles, Johanna Konta - who reached the semi-finals in 2017 - plays Natalia Vikhlyantseva.

Defending men's champion Roger Federer - who will play in his 20th Wimbledon Championship - faces Serbia's Dusan Lajovic, while world number one Rafael Nadal will take on Dudi Sela of Israel.

Murray cautious but positive about playing

Murray said after his loss to compatriot Edmund at Eastbourne on Wednesday that he would only play at the All England Club if he knew he could compete.

"I feel all right, not much different to a couple of days ago," he said after practising at Wimbledon on Friday.

"I will see how the next couple of days go. I'm playing sets on Saturday, but most likely I'll be playing.

"I need to play it a little bit by ear, I can't predict how I will feel in two days.

"If I feel like I do today in a couple of days then I'll be playing."

He missed Wimbledon in 2007 with a wrist injury but has played every year since, and has reached at least the quarter-finals each time.

The Scot's last competitive match in 2017 came at Wimbledon - where he was the defending champion - and ended in a five-set defeat by American Sam Querrey in the last eight.

Murray had hip surgery in January and made his return at Queen's, losing in three sets to 19th-ranked Australian Nick Kyrgios.

He registered his first victory a week later, beating Wawrinka at Eastbourne, before losing in the second round to Edmund.

Murray set to play on Tuesday

Murray is in the bottom half of the draw, meaning he will play on Tuesday - the same day as England's football World Cup last-16 tie against Colombia.

The Scot beat Paire in straight sets to reach the quarter-finals of Wimbledon last year - his most recent Grand Slam appearance.

Paire, ranked 48th in the world, came within a point of beating Federer at the Halle Open last week.

If Murray does play and beats Paire, he would play either Canadian 26th seed Denis Shapovalov or another Frenchman, Jeremy Chardy, in the second round.

He could play Argentine fifth seed Juan Martin del Potro in the third round, while 17-time Slam champion Nadal is also in the same half of the draw.

Paire is a powerful, potentially dangerous, but definitely unpredictable opponent: and coincidentally the man Murray beat in last year's fourth round before his hip became unmanageable.

The new British number one Edmund could play the three-time champion Novak Djokovic in the third round, and last year's semi-finalist Konta also looks to have some challenging early round matches. If she survives the first week, she could face the world number one and French Open champion Simona Halep in the fourth round.

Williams' seeding offers her protection in the first two rounds. Her first opponent Rus has not won a match at Wimbledon for six years, but in the third round, in only her fourth tournament since giving birth, the seven-time champion could play the fifth seed Elina Svitolina .

Williams, who has not played on grass since winning Wimbledon in 2016, was given a seeding despite being outside the top 32 in the rankings.

The 36-year-old American is continuing her return to action after giving birth to her first child in September.

Williams has played only three tournaments in the past 12 months and is ranked 183rd in the world.

If the 23-time Grand Slam champion beats Dutch world number 107 Rus she will then face another player ranked outside the top 100 in either Czech Tereza Smitkova or Bulgarian Viktoriya Tomova.

Williams could face Ukrainian fifth seed Elina Svitolina in the third round.

Slovakia's world number 32 Dominika Cibulkova, who was not seeded as a result of the Williams decision and complained it was "unfair", faces France's Alize Cornet - the winner possibly playing Konta in round two. 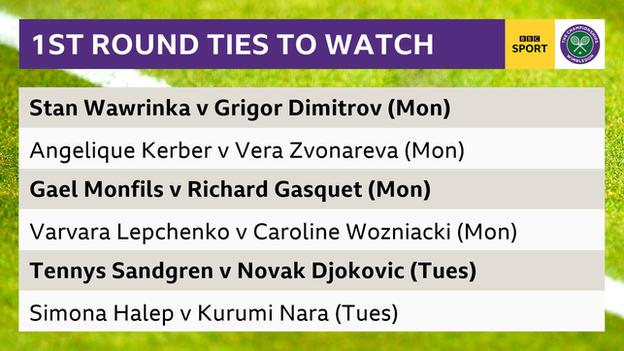 Konta, 27, memorably reached the semi-finals at the All England Club last year, losing to eventual runner-up Venus Williams, helping the Briton climb to a career-high fourth in the rankings.

However, she has failed to match that level of performance since and has dropped to 22nd.

She starts at the All England Club this year with a first match against 21-year-old Russian Vikhlyantseva, who is ranked 106th in the world.

Konta is projected to play world number one Simona Halep, whom she beat in the quarter-finals last year, in the fourth round.

What about the other Britons?

There are a number of eye-catching draws for the other Britons in the main draws.

In the men's, British number two Cameron Norrie faces Aljaz Bedene, who represented Britain before switching back to his birth country Slovenia last year, while wildcard Liam Broady meets Canadian 13th seed Milos Raonic, who was beaten by Murray in the 2016 final.

In the women's, debutants Katy Dunne and Gabriella Taylor both face players who have appeared in Grand Slam finals.

Dunne, 23, plays 2016 French Open champion Jelena Ostapenko and, if she beats the Latvian sixth seed, could meet compatriot Heather Watson in the second round.

Taylor, 20, plays Canada's Eugenie Bouchard, who was beaten in the 2014 final but had to come through qualifying this year.