Great Britain's wait to play in the Fed Cup World Group will continue after they were beaten 3-2 by Japan in their promotion play-off.

Johanna Konta and Heather Watson were defeated 3-6 6-3 6-3 in the deciding doubles rubber by Miyu Kato and Makoto Ninomiya.

Britain have not competed in the World Group since 1993.

It is the fourth time in seven years that they have lost a promotion play-off.

"We are gutted about the result. One day our opportunity will come," Great Britain captain Anne Keothavong said.

"If you keep knocking on the door, it will eventually open. It wasn't to be this year but who is to say it won't be next year?"

Britain will compete again in Europe/Africa Group I in February 2019, playing three matches against three nations in a neutral venue in an attempt to reach another play-off.

Anna Smith and debutant Gabi Taylor were the original nominations for the doubles but British captain Anne Keothavong replaced them with the more experienced pairing after Watson lost Sunday's second singles match.

It was a desperately disappointing outcome for Britain, especially after Konta put them 2-1 up with a superb display against the in-form Osaka.

"I'm proud of the effort both Jo and Heather put into the singles and doubles," Keothavong added.

"Despite the short turn-around time I have no doubts that was the right decision for them to play the doubles."

Britain will feel this is an opportunity they let slip by after being in strong positions in the doubles and Watson's match against Nara.

In the doubles rubber, Konta and Watson won five games in a row from 2-0 down before the latter sealed the first set with a volley on their second set point.

The hosts also opened up a 2-0 lead in the second set and saved four break points before holding in what proved a significant third game.

Another break took Japan to 5-0 up and although Konta and Watson fought back to 5-3, a Ninomiya volley levelled the match.

Britain saved four break points to go 3-2 up in the decider but did not win another game with Ninomiya slamming a fierce forehand return between Konta and Watson on Japan's third match point. 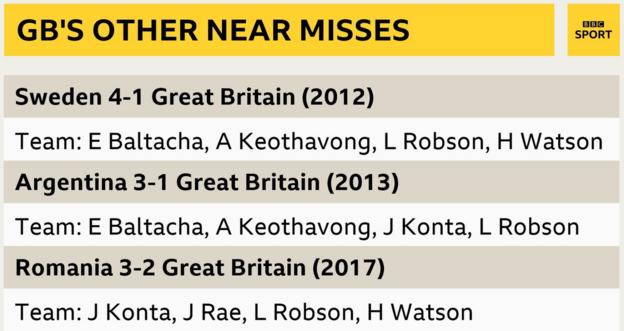 Both Britons have been struggling for singles form recently; Konta has won only eight times in eight WTA Tour matches this season, while Watson has lost her past seven matches on tour.

While Konta looked strong in Japan, Watson is clearly lacking in confidence.

It was a topsy-turvy match against Nara, featuring 11 breaks of serve, and Watson will rue missed opportunities in the first set, having served for it at 5-3 and been 6-3 up in the tie-break. A double fault on her third set point proved costly before a backhand down the line gave Nara the set.

Watson fought back from 3-0 down in the second set to 3-3 and broke again when Nara served for the match at 5-3 but a netted forehand sealed her fate in the next game.

In contrast, Konta was excellent against Indian Wells champion Osaka, breaking twice in the first set and once in the second.

The 26-year-old has dropped to 23 in the rankings since reaching the Wimbledon semi-finals last year, but was sharp throughout and was not broken on her own serve.

After beating Nara in straight sets on Saturday, Konta has at least given a indication she can get back to her best form with the French Open and Wimbledon on the horizon.

'People underestimate the task to get out of this group' - reaction

"We have to recognise the effort we have put in the last two years getting out of the zone. People underestimate the task it is to get out of that Euro-Africa group.

"Some of the best nations are in that group, when you look at the depth of the other zonal groups around the world.

"I'm very proud of the fact we keep putting ourselves in this position."

"We left everything we had out there. As Jo said, one of these days, things will eventually go our way."