World number two Caroline Wozniacki claims her parents were subjected to death threats as she lost in the Miami Open to Puerto Rico's Monica Puig.

Wozniacki, who won her maiden Grand Slam at the Australian Open, said she and other family members - including children - were also verbally abused.

"When certain lines are crossed it makes tennis miserable for both competitors," she said.

Wozniacki eased through the opening set before going on to lose 0-6 6-4 6-4 to Puig, the reigning Olympic champion and ranked 82nd in the world.

Puig, who lives in Miami and describes the tournament in Key Biscayne as her "home" event, was backed throughout by the crowd.

"During the match people in the crowd threatened my family, wished death upon my mom and dad, called me names that I can't repeat here and told my fiance's niece and nephew (who are 10 years old) to sit down," Wozniacki wrote in a post published on her Twitter account.

"I hope the Miami Open chooses to take this seriously because it is a horrible example to set for the next generation of tennis players and fans."

"The match between Caroline and Monica was played in front of a loud and passionate crowd," he said.

"While I personally feel that no-one should have to endure any sort of abuse on the court, we do our best to provide a safe and fair environment.

"During the match, we had tournament and WTA staff as well as tournament security courtside.

"They never witnessed, nor were they notified, of any specific threats made to the players or their families. If we had been notified, the situation would have been handled immediately." 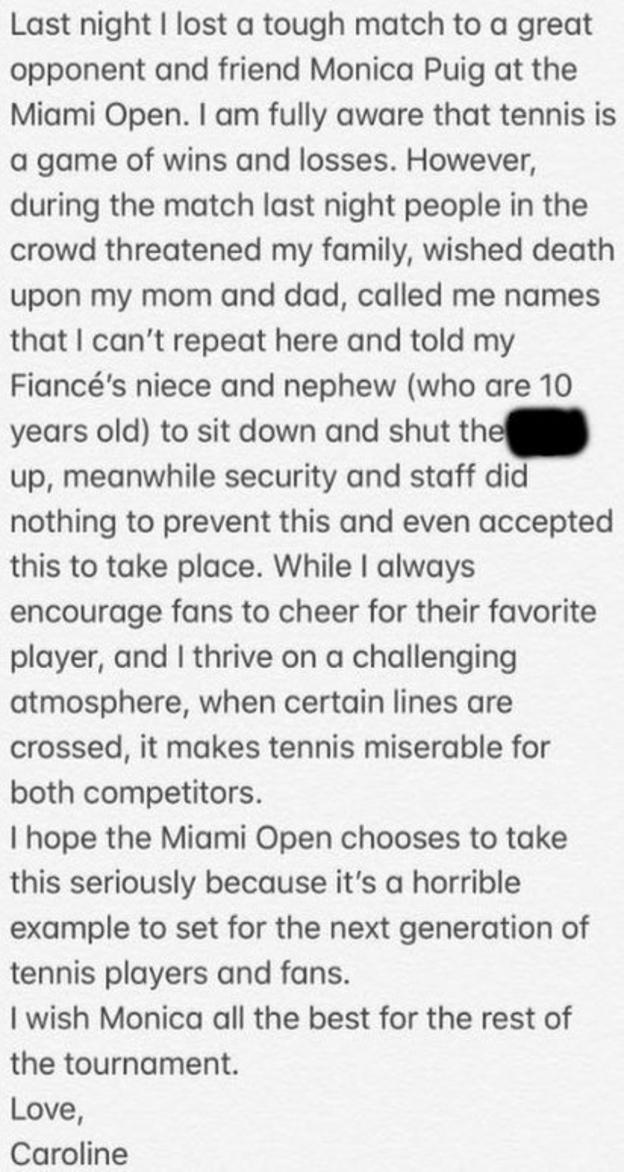 In Case You Missed It...