Unseeded Sloane Stephens completed a spectacular return from injury by beating fellow American Madison Keys to win the US Open at Flushing Meadows.

The 24-year-old was ranked as low as 957th six weeks ago, having only returned from 11 months out with a foot injury at Wimbledon.

She becomes only the fifth unseeded woman to win a major title in the Open era.

Both women were making their Grand Slam final debuts, and their combined ranking of 99 was the lowest for a US Open final since the rankings began.

Close friends since childhood, they shared a long hug at the net after Keys netted a forehand on the third match point.

"I had surgery in January and if someone had told me then that I would win the US Open, I would have said it was impossible," said Stephens.

"This journey has been incredible and I wouldn't change it for the world.

"Madison is one of my best friends on tour. I wouldn't have wanted to play anyone else. I told her that I wished it could have been a draw."

Keys, who was playing with her right thigh heavily strapped, said: "Sloane is truly one of my favourite people and to play against her was special. I obviously didn't play my best tennis and Sloane was very supportive.

The first American woman from outside the Williams family to win a major singles title since Jennifer Capriati at the 2002 Australian Open, Stephens collected £2.84m in prize money.

Stephens too solid for error-strewn Keys

Keys, 22, had played superbly to win her semi-final against Coco Vandeweghe, making 24 winners to just nine errors and moving to the top of the aces chart with a display of controlled power.

Stephens had come through a far more tense encounter against Venus Williams, with her athletic defensive skills all the more remarkable as her foot had been in a protective boot as recently as May.

It was her calm consistency that prevailed in a final that became something of a horror show for Keys. 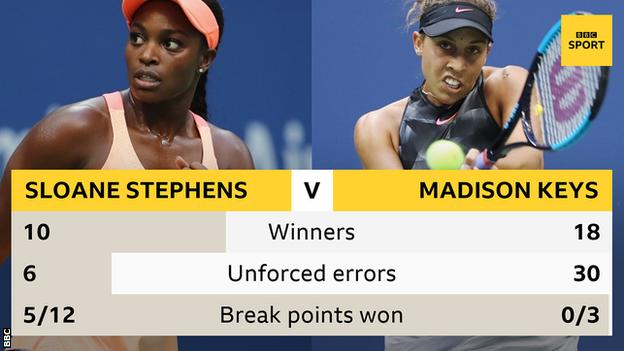 Over the course of 61 minutes, she made 30 unforced errors to just six from the rock-solid Stephens.

After the first four games went quickly with serve, Keys was broken when a forehand flew long, and a similar error gave up the set after half an hour.

Keys offered up another opportunity early in the second with a woeful backhand volley, and Stephens grabbed her chance with a rasping backhand winner followed by a cross-court forehand.

The final appeared as good as over when Keys double-faulted to fall 4-0 down, and even when she finally earned break points - three of them at 0-40 after 47 minutes - Stephens would not buckle.

The third of them was seen off with a dart to the net and a confident forehand volley, leaving Stephens to serve for the match.

There was a final flurry of resistance from Keys but she could only find the net on match point number three, as Stephens reeled off eight games in a row to clinch her first major title.

Two close friends, both in tears, ended up sitting side by side on the same side of the net as they awaited the presentation ceremony.

The match itself had been an anti-climax: Stephens simply played with too much skill, accuracy and composure for Keys, who did not take nearly as well to her maiden Grand Slam final and seemed hindered by a leg injury.

For three consecutive years, Stephens was the youngest player in first the top 100, then the top 50 and ultimately the top 20. There then came a period of struggle followed by foot surgery and now a US Open title.

The next chapter is hard to predict, but she will next week return to the world's top 20 and forever be viewed in a different light by her fellow professionals.