With Wade watching from the Royal Box, Konta served superbly to win in two hours and 38 minutes and set up a semi-final against American Venus Williams.

"I've always believed in my own ability and I've always dreamt big," she said.

"But I'm much more process orientated, so I don't give myself too much time to dream. I'm more focused on the work."

Konta is just two victories from matching Wade's 1977 triumph and will take on five-time champion Williams on Thursday for a place in the final.

"I know how much pressure there is. It's wonderful to be in an atmosphere like that, and she behaves very nicely.

"I have to hand it to her, that was a brilliant performance."

Halep, 25, would have replaced Germany's Angelique Kerber at the top of the rankings with victory over Konta, but Czech Karolina Pliskova will instead be the new world number one.

'I continued to trust in myself'

Konta has repeatedly spoken of the mental and tactical "process" she relies upon during her rise up the rankings, and it held up superbly under huge pressure.

She finished the match with 36 unforced errors to Halep's nine, but trusted in an attacking game plan that produced 48 winners to 26.

And having coped with the tag of title favourite since she won her second-round match, Konta overcame an opponent on the brink of becoming world number one with impressive poise.

"I knew against Simona she wasn't going to give me much for free and I had to create my own chances and I took a few of them," she said.

"I felt consistent in my approach and in my general being out there. I continued to trust in myself."

Konta has won three of her five previous meetings against Williams, and looking ahead to their sixth encounter said: "I definitely feel age isn't a factor with Venus.

"She's a tremendous champion and I feel humbled to share a court with her." 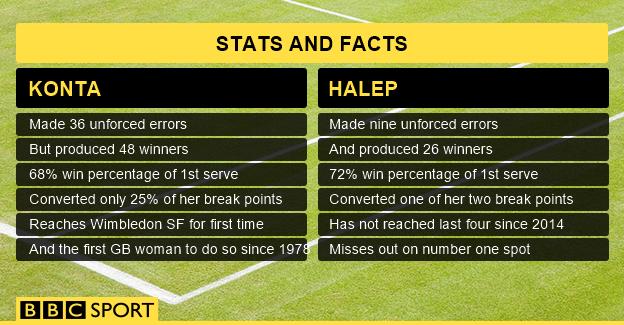 A superb serving display from Konta under the Centre Court roof was almost undone by too many errors on key returns, with six break points slipping by before she made the decisive move in the final set.

The contest pitted Konta's excellent serve and powerful hitting against Halep's brilliant footwork and ability to force the pace from the baseline.

It was the latter that held sway early on, with Halep's serve holding up surprisingly well and Konta falling 4-1 down with her seventh error.

The Briton then found her range, breaking back with a couple of fierce returns and a thumping cross-court backhand, and drawing level at 4-4 with a run of 12 out of 14 points.

Konta had made a remarkable 25 of 26 first serves by the time she levelled at 5-5 and would end the set with an 89% success rate, but it was Halep who went ahead in the tie-break.

Two errors in a row left Konta 5-2 down and Halep took advantage with a sweeping forehand winner, before the Briton's 12th error gave up the set.

The second set saw Konta make the running but fail to capitalise, her return repeatedly letting her down as four break points slipped by.

It looked like costing her the match when Halep went 5-4 up in the tie-break, two points from victory, but Konta took it with a forehand down the line and a rasping backhand into the corner, which brought a roar from the 15,000 spectators.

Halep had a fleeting chance early in the decider with just her second break point of the match, but Konta saw it off with a forehand down the line and grew stronger as the set progressed.

A Halep forehand flew wide to give up the break in game five and, despite the magnitude of the prize on offer, Konta held firm on serve to move to match point.

There was a momentary pause when a spectator screamed mid-rally, clearly upsetting Halep, but the Romanian found the net and the umpire confirmed that victory was Konta's.

Halep later described the Centre Court crowd as "very nice and fair", but added: "I think it's normal to repeat the point when someone is screaming like that."

Billie Jean King, six-time Wimbledon singles champion: "I'm impressed with her whole story - from just sticking to what she believed in and learning how to be the best she can be. And Jo's going to get better.

Marion Bartoli, 2013 Wimbledon champion: "Konta has been able to really stay in her bubble. She just plays so much within herself. She doesn't want to have even more pressure from the crowd.

Annabel Croft, former British number one: "Not even a flicker of emotion from Jo, that's how she can cope with it.

"I have seen her have some meltdowns when under intense pressure, but she has learned. She has been done as much work on the mental side of her game as she has technique."