British tennis player Jay Clarke has revealed that he receives 15 to 20 racially abusive messages a month on social media and it is "not a surprise" when it happens.

British number nine Clarke, 18, tweeted an example which referred to him as a monkey and included monkey emojis.

"It has happened a few times. It's the first thing people go to - colour," the world number 394 told the BBC.

"The first few times it's a shock, now you're almost waiting for it."

The Derby native was speaking after losing 7-6 (7-2) 6-1 in the first round of the Nottingham Open to India's Yuki Bhambri, the world number 231.

"[It happens] when I lose to people I shouldn't lose to or lose tight matches," he added.

"It's upsetting that people think like that but it's not the first time it's happened and I'm sure it won't be the last.

"It was important for other people to see. I get a lot of messages like that throughout the year. I'm sure a lot of other people do as well." 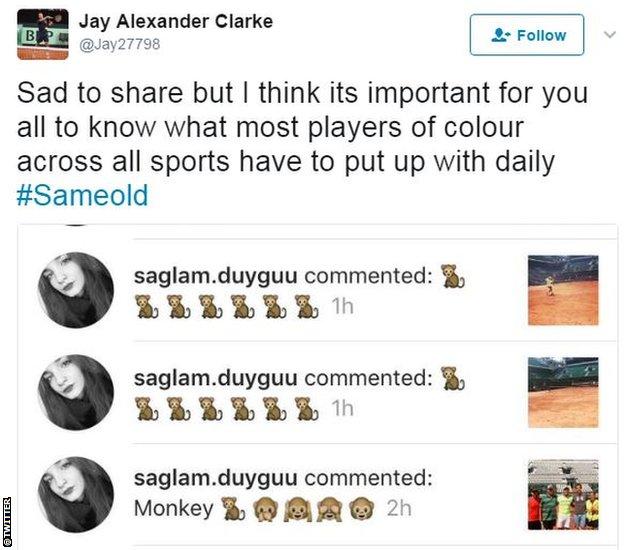 The teenager has rapidly risen up the rankings in the last year, having been number 1,621 in the world in June 2016.

He trained with Andy Murray before the French Open and travelled with the Great Britain Davis Cup team for their recent tie against France.

Clarke said he had discussed racist abuse with other players on the tour.

"There are a few things that have happened to [Gael] Monfils and a lot of the other guys I have met on tour," he added.

"It was something I talked about a lot when a kid. Not to expect it, but there will be people who are like that.

"Dealing with it has helped a lot. It is not that big a surprise now."