Novak Djokovic won his first match under new coach Andre Agassi, while Rafael Nadal took a first step towards his 10th title at the French Open.

Asked about Agassi, the Serb said: "He has a lot to share with me outside and inside of the tennis lines. I'm really enjoying it so far."

"Always at the start, I'm happy for the victory," said the Spaniard. "It was not an easy opponent in the first round, obviously.

"He's an uncomfortable opponent that already had some good victories this year. I came on court with a lot of respect."

Seventh seed Marin Cilic is also through after he won 6-3 6-3 6-3 against Ernests Gulbis.

But ninth seed Alexander Zverev of Germany, who beat Djokovic to win the Italian Open, will have to return on Tuesday to continue his match against Spain's Fernando Verdasco after rain and failing light brought an end to their contest with the score tied at one set all.

Djokovic, 30, was out early on Philippe Chatrier Court practising under the watchful eye of new coach Agassi, and he returned a few hours later to get their first win on the board.

It was hardly vintage Djokovic, with the second seed making 29 unforced errors and falling to convert 12 break points.

He needed eight chances just to clinch the second set as he eventually made it through after two hours and 27 minutes of hard work in sweltering conditions.

For Agassi it was a successful, if not entirely comfortable, return to the court where he completed his career Grand Slam in 1999.

At one point there was a chance to catch up with old rival Boris Becker, the man he replaced as Djokovic's coach, that partnership producing six Grand Slam titles.

The Las Vegan is only scheduled to stay in Paris until the end of this week before he has to leave for other prior engagements.

"I'm going to try to use the time spent with him as best as I can, as best as we can," said Djokovic. "So far plenty of information, plenty of things to kind of process.

"I think this is exactly what I need at this moment, a person like him that understands the transitions as a tennis player and as a person as well, going through these kind of lifestyle and certain choices that you make, how that affects you later on."

Nadal, 30, was up against the crowd as much as his opponent as he took on Frenchman Paire on the lively Suzanne Lenglen Court.

The fourth seed was himself given a huge ovation as his list of title wins stretching back to 2005 was read out, and he dominated for the most part.

An unexpected rash of errors early in the second set allowed Paire into the match, and the world number 45 had a break point to lead 5-3, but Nadal snuffed out the danger and powered home.

"For me, it's important to serve a little bit better than I did today," said Nadal.

"The rest of the things I am happy with." 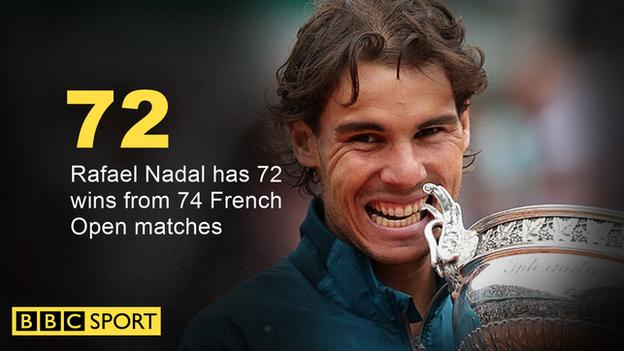