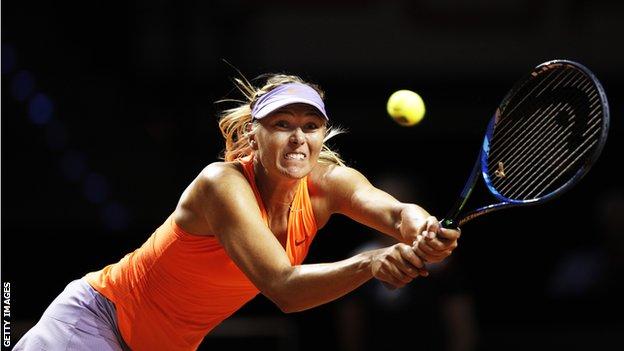 From Maria Sharapova's perspective, Wednesday 26 April could not have gone much better.

She is in possession of WTA ranking points once again after proving too strong for Roberta Vinci in her first match since a 15-month ban for taking the banned drug meldonium.

There were errors, of course, and her movement is a work in progress, but she served strongly and returned with aggressive intent: hitting nearly twice as many winners as unforced errors. And she played with sheer bloody mindedness, in the way she always has.

The Stuttgart crowd was respectful of Sharapova, and generous in her moment of victory, although the real warmth was reserved for her opponent.

This first win will move the former world number one to the cusp of the top 500, but her ambitions for the week will stretch further, given the way she played and the frailties of some of the top seeds.

Defeats for both Agnieszka Radwanska and Garbine Muguruza mean Sharapova cannot face a seeded player before the semi-finals. The top players in the women's game remain maddeningly inconsistent, and with Serena Williams pregnant, Victoria Azarenka on maternity leave and Petra Kvitova still recuperating from December's stabbing, there are opportunities galore.

Sharapova is a five-time Grand Slam champion, and a likely future champion. This may be her 15th year on tour, but she has missed more time than most due to shoulder problems, as well as the ban. And rest did Roger Federer no harm before the Australian Open in Melbourne, when he clinched his 18th Grand Slam title after a six-month injury lay-off.

She has won Slams on all surfaces and is brimming with motivation on her return from what she considers an unduly harsh ban imposed for an administrative error. And mentally, she is stronger than anyone bar Serena Williams.

But it will probably take time. Stringing together seven wins in a row at a Grand Slam is notoriously difficult when you lack match practice and sharpness, and Sharapova may have to negotiate an extra three matches of qualifying at Roland Garros and Wimbledon.

This was one of the main themes of her first news conference with regular tennis writers for 15 months. I thought she seemed nervous, quite frosty and was confrontational at times.

"I'm not getting a wildcard to receive a trophy or a golden platter," she said when asked about the numerous tournament invitations which have upset so many of her peers.

"I have to get through the matches and I still have to win them and that's my job."

Caroline Wozniacki and Radwanska are just two players to have questioned why a player returning from a doping ban is being offered so many wildcards. The former world number one and number two were dismissed as "journeyman" players by Sharapova's agent Max Eisenbud.

"I don't control my manager's words," Sharapova said when asked for her response, and then made no attempt to distance herself in the slightest from the sentiments.

"I'm sure he's been watching everyone's comments in the previous 15 months and he's entitled to his own opinion."

Sharapova's lack of camaraderie has never held her back in the past, and she still has no desire to form friendships on tour. That wouldn't help her tennis, she pointed out. The locker room is where you go for an ice bath, she argued. Her true friends can be found away from the workplace.

Sharapova would love to be at Roland Garros and Wimbledon this year, and she says she would be "prepared to play in the juniors" if it helped. She would need to reach the final here in Stuttgart to earn sufficient ranking points to gain direct entry into the qualifying draw of the French Open.

If she fails to do so, her fate will be revealed to great fanfare on the evening of Tuesday 16 May, when wildcards for both qualifying and the main draw will be announced on Facebook Live.

The All England Club is unlikely to go down the same route.

Officially, wildcard recipients will not be determined until Tuesday 20 June, by which time Sharapova could be back in the top 100 and eligible for the main Wimbledon draw. To do so she will need to earn close to 600 ranking points from this week and her next two tournaments in Madrid and Rome.

A return of one semi-final and one quarter-final is likely to be enough, but that would still be some effort after so long away from the sport.