This has been the era where British sport has blessed its loyal followers like never before: fourth, third and second places in the Olympic medal table; the Tour de France yellow jersey won in four of the past five years; the miracle of a first male Wimbledon champion in 77 years, a marvel repeated three years on; the Davis Cup won for the first time since tennis was played in slacks and cable-knit jumpers.

It goes on. A first Olympic diving gold, a first Olympic gymnastics gold, and then a second, from the same man, a few hours later. Multiple Formula 1 world titles, Lions series won. The first woman in history to win an Olympic boxing gold, the first to retain one too.

And now another bequest, from a man who has already provided so much. A British tennis player as world number one is an idea as ludicrous to recent memory as anything else in that giddy list, but with Andy Murray, we should no longer be surprised.

To a nation systematically unable to produce tennis champions despite finances and facilities at the elite level to embarrass others as well as itself, Murray is the gift that keeps giving.

Only 26 men have held that solitary ranking since the calculations went computerised 43 years ago. It is not a gimmick, or a marketing exercise, or even a reward in itself, but a defining benchmark. You cannot fluke it or get lucky with a judging panel. It is deserved. It is definitive.

"Being number one is the pinnacle of all the ambitions of every player," said Novak Djokovic, the man just deposed, when he began his own long reign three years ago. "This is the dream."

A landmark 12 months for Murray

Andre Agassi has described how miserable it made him, how the achievement seemed to legitimise his father's cruel ambitions and obsessions rather than his own. John McEnroe, who spent a cumulative total of 170 weeks at the top of the pile, found it lonely atop the exposed summit.

"You're out there on your own island," he once said. "And you feel like you're disengaged, not only with the rest of the world, but the rest of your competitors, some of them friends."

Climbing the mountain is often an easier task in sport than defending your splendid isolation.

The England rugby union team who won the World Cup in 2003, having gone into that tournament as Grand Slam winners and on an unbeaten home run stretching back 22 games and four years, finished third in the subsequent Six Nations and fourth in the next two.

"In a game, thousands of decisions are being made, but it only needs a few to be the wrong ones for the team's fortunes to reverse," says Matt Dawson, scrum-half in that team. "When it goes, it goes quickly."

It was the same for the England cricket team who rose to number one in the Test rankings after beating India in the summer of 2011: whitewashed in their next Test series, against Pakistan in the UAE, and then dismantled at home to South Africa the following summer, losing their captain Andrew Strauss and, for a while, their star batsman Kevin Pietersen.

Being world number one gets you respect. It also makes you a target. Everyone wants your scalp. Every defeat is automatically a headline.

Even your own motivation can begin to slide, if only subconsciously, if only by minute fractions. How to focus on the next target when you can climb no further? Where can you go from the top but down?

Murray's character may insulate him from those uncertainties for a while yet.

The 29-year-old's new position reflects both his own remarkable consistency over the past 12 months and the personal and physical problems that have shackled Djokovic, but it is also testament to a desire for self-improvement only occasionally found in sportsmen of his age.

Ranked 17th in the world a decade ago, he was gloriously log-jammed at four in those four seasons from 2008 to 2011, the unprecedented trio of Djokovic, Roger Federer and Rafael Nadal seeming to block any further ascent.

He dropped to sixth in 2014 after his back surgery and then appeared stymied at second for the past year as 12-time Grand Slam champion Djokovic went through the peak of his reign. 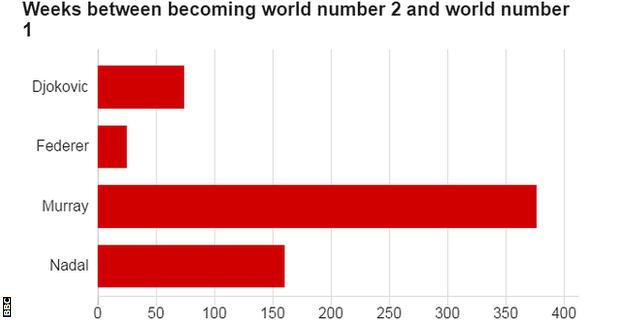 The belief and the hard work never dropped off. Different coaches, tweaked training, a renewed focus on the basics that, in this year alone, has seen his second serve refashioned and accelerated.

In defeat by Kei Nishikori in the US Open quarter-finals in September and Juan Martin del Potro in the Davis Cup semi-finals soon afterwards, he seemed physically spent - only to emerge revitalised in the past two months on this celebrated spree across first east Asia and now western Europe.

And it is testament to self-belief too - that in an era decorated by three of the greatest players of all time, he could be crowned the best; that seven years and two months after first reaching number two, he could still take that final special step.

Plenty of fine Grand Slam-winning players have never been world number one, Michael Chang, Goran Ivanisevic and Michael Stich among them.

Many who have got there are arguably now in Murray's shadow: Pat Rafter, Carlos Moya, Marcelo Rios; definitely Yevgeny Kafelnikov and Thomas Muster; quite possibly Marat Safin and Andy Roddick, Ilie Nastase, Gustavo Kuerten and Lleyton Hewitt too.

Rankings in sport do not always reflect the accepted wisdom. Angelique Kerber may sit above Serena Williams in the women's tennis rankings, but with Williams having won five of their past six meetings and seven times as many career titles, the debate over who is the better player would be short.

Triathlon's world rankings, based only on the year's World Series results, have Spain's Mario Mola as world number one, when every judge in the sport would define double Olympic champion Alistair Brownlee as the best in the world.

Few could dispute Nick Faldo's claim to be the best golfer in the world when he topped golf's rankings. A few days after going to number one himself, Ian Woosnam would win the Masters.

Luke Donald's ascension in 2011 was deserved - he was the first player in history to win the money title on both European and PGA tours in the same season - but because he had never finished as runner-up in a major, let alone won one, there were those who disputed the algorithm's accuracy. So too with Lee Westwood, number one in the same year, still to win a major five years on.

The number alone can be less important than the aura a player brings to it. After an unparalleled 12 months - that Davis Cup triumph, winning BBC Sports Personality for the second time, reaching his first French Open final, winning his second Wimbledon, taking Olympic singles gold yet again - Murray has that too.

And this may yet be the start of something even more beautiful, rather than the pinnacle.

After five defeats in the Australian Open final, never will Murray have a better chance of winning it than this January, Federer and Nadal faded, Djokovic - his nemesis in four of those finals - jaded.

The French Open title could conceivably be the next unprecedented prize to be pouched. And then Wimbledon again, and why not, after all that has been before?

It is dreamy, fanciful stuff. But that has been Murray's motif: ripping up precedent, making the impossible real.