Andy Murray says he feels "very proud" to become the first British singles player to be world number one since computerised rankings began in 1973.

The Scot, 29, needed to reach the final of the Paris Masters to replace Novak Djokovic - and did so when Milos Raonic pulled out before their semi-final.

"I never thought I'd be number one in the world," he told BBC Sport.

"It's been many years of work to get here. It's been such a difficult thing to do because of how good the guys around me have been."

Murray, who has won three Grand Slam titles, two Olympic gold medals and helped Britain win the Davis Cup in 2015, will be officially confirmed as world number one when the revised rankings are released on Monday.

Novak Djokovic had topped the rankings for 122 weeks, and completed his career Grand Slam by beating Murray in the French Open final in June, his 12th major title.

Djokovic also won this year's Australian Open, and Murray said: "The year that Novak has had, barring the last six weeks or so, has been incredible.

"The year I've had to have to barely get there has been unbelievably difficult. I've had to work extremely hard."

Roger Federer (17) and Rafael Nadal (14) have won a combined 31 Grand Slam titles, many coinciding with Murray's rise through the rankings.

He will play John Isner in Sunday's Paris Masters final, after Raonic pulled out with an injury to his right quad. Isner beat Marin Cilic 6-4 6-3 in the semi-finals.

Djokovic, 29, would have retained his number one ranking had he reached the final - but Cilic beat him in the quarter-finals on Friday. 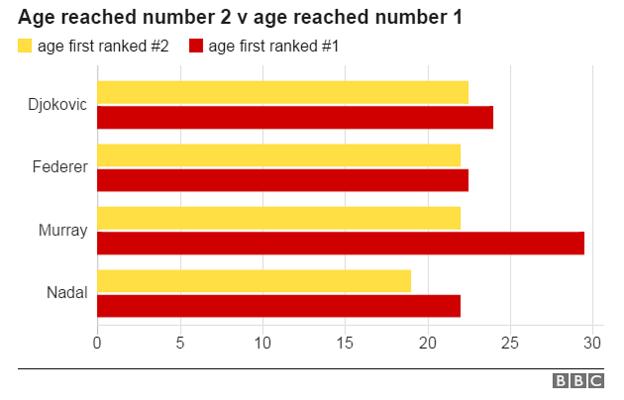 The stats behind Murray's rise to number one

Murray's crowning moment was nothing like anticipated. Instead of beating Raonic on Bercy's centre court, it was in the locker room the Canadian delivered the news he wouldn't be able to contest the semi-final because of a tear in his thigh. Murray was reviewing Raonic's quarter-final performance on his tablet at the time.

The speed of his achievement is breathtaking given that Djokovic had nearly double the number of ranking points in June.

The year end number one ranking is Murray's next immediate goal, and a win over Isner would grant him some valuable breathing space should Djokovic raise his game at London's season ending World Tour Finals. 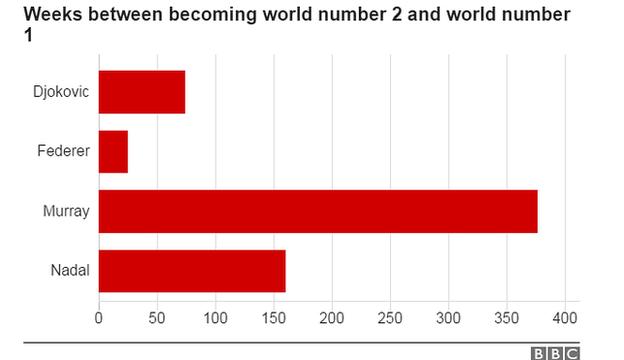 A landmark 12 months for Murray

Murray's mother Judy, former captain of GB's Fed Cup team: "I think this is just reward for his perseverance, his patience and his resilience because he's such an incredible fighter.

"When people watch on television they don't see what goes into getting the player to that stage. I know better than anybody how much he has put into his tennis over many years."

Coach Jamie Delgado: "There were a few gentle tears and a big hug - there was a bit of shock in there as well.

"It's amazing. It's been an unbelievable year. Looking back to March, April time, he lost a bit of confidence, and motivation was down a little bit because he had fallen far behind Novak already - number one wasn't in our thoughts really.

"For it to happen this year, there is huge elation. Any time you get to the ranking is amazing, but to finish the year like that is a little bit special, so that's our next aim."

Former coach Miles Maclagan: "He deserves to be among the likes of Boris Becker and John McEnroe - people who have won five, six, seven Slams and have been number one.

"He's got the three Slams at the moment but the two Olympics and the Davis Cup cement his place. He belongs among those greats."

ATP president Chris Kermode: "Andy has shown incredible dedication, determination and hard work in his bid to get to number one.

"It's difficult to think of a player more deserving of this accolade - in one of the toughest eras in the history of our sport.

"He has had a phenomenal season and fully deserves this latest recognition, which confirms his status as the best player in the world."

Former world number one Martina Navratilova: "Considering how few people have had it in the last 16 years since Roger Federer first took it, it's a major accomplishment indeed. It's a pretty exclusive club.

"He's been the most consistent player on all surfaces, he's just not giving anything away these days.

"The fact that it came this late in his playing career just tells you how determined and focused he is. It's a testament to his character."