Maria Sharapova's two-year doping ban has been reduced to 15 months following her appeal to the Court of Arbitration for Sport.

The five-time Grand Slam winner, 29, was initially banned by the International Tennis Federation for two years after testing positive for meldonium at the 2016 Australian Open.

"I am counting the days until I can return," she said.

"In so many ways, I feel like something I love was taken away from me and it will feel really good to have it back. Tennis is my passion and I have missed it."

Sharapova said she had been taking the drug since 2006 for health problems and had "not tried to use a performance-enhancing substance".

She said she was unaware the drug had been added to the World Anti-Doping Agency's (Wada) banned list and could not "accept" the "unfairly harsh" ban.

The Cas panel said it found Sharapova's case "was not about an athlete who cheated", adding she was not an "intentional doper".

However, it said Sharapova was at fault for not giving her agent "adequate instructions" about Wada's prohibited list.

The tribunal ruling said Sharapova tested positive for meldonium after her Australian Open quarter-final defeat by Serena Williams on 26 January and in an out-of-competition test on 2 February.

Cas treated both results as a single anti-doping violation.

Sharapova won the Wimbledon singles title as a 17-year-old in 2004, going on to win the Australian, French and US Opens to complete a career Grand Slam.

However, she has not played professional tennis since losing to 22-time Grand Slam champion Williams.

"I've gone from one of the toughest days of my career last March when I learned about my suspension to now, one of my happiest days," she said.

"I have taken responsibility from the very beginning for not knowing that the over-the-counter supplement I had been taking for the last 10 years was no longer allowed.

"But I also learned how much better other federations were at notifying their athletes of the rule change, especially in Eastern Europe where mildronate is commonly taken by millions of people.

"Now that this process is over, I hope the ITF and other relevant tennis anti-doping authorities will study what these other federations did, so that no other tennis player will have to go through what I went through."

Why was the ban reduced?

Sharapova appealed against the original two-year ban on the grounds there was "no significant fault or negligence" on her part.

The Cas panel accepted her claim of no significant fault, saying she had a reduced perception of the risk she was incurring by taking mildronate.

Cas said the sanction should be reduced to 15 months "based on its analysis of Sharapova's degree of fault".

It said Sharapova "fell short" because:

The panel added an athlete cannot "simply delegate her obligations to a third party and then not otherwise provide appropriate instructions, monitoring or supervision without bearing responsibility".

Sharapova can return to action before the French Open in May 2017 because her ban is backdated to the date of her first positive test on 26 January, 2016.

But with her world ranking dropping to 95 since her last appearance - and going to fall further - she will need to be awarded a wildcard to play at Roland Garros.

"The crux of the matter is that Cas decided it was reasonable for Sharapova to delegate her anti-doping duties to Max Eisenbud and the IMG agency, even if, on this occasion, those duties were not exercised with remotely enough care.

"In the past three years, both Marin Cilic and Viktor Troicki have also successfully argued less blame should be laid at their door.

"Cas has repeatedly set a player's bar of responsibility lower than the ITF thinks it should be. As a result, there must be a concern some players may in future take anti-doping less seriously than they should."

Racquet manufacturer Head, which extended its contract with Sharapova despite her positive test, congratulated her after the ban was reduced.

Nike suspended its relationship with Sharapova in March, before saying it would stand by her following the tribunal's findings in June.

Car manufacturer Porsche said it would wait to see the outcome of her appeal, while Swiss watchmaker Tag Heuer cut ties with her in March.

Sharapova was the highest-paid female athlete for 11 consecutive years according to Forbes, until Williams moved above her this year.

The latest Forbes figures have Sharapova's winnings and endorsements at £17.1m, compared with £22.6m for Williams. 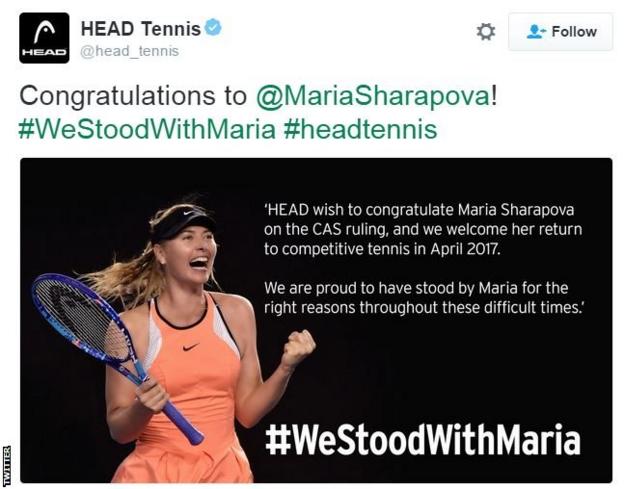 Alexander Zhukov, the head of Russia's National Olympic Committee, said: "I hope Maria recovers and joins the world tennis elite and competes in the Tokyo Games. I sincerely wish her sporting longevity."

Michael Verzhba from the Russian Tennis Federation, added: "We are satisfied with the decision. The court considered that it was not intentional breach of Wada regulations and that she confessed and repented."

WTA chief executive Steve Simon said: "We are pleased the process is now at completion and we can look forward to seeing Maria back on court in 2017."

Former British professional Anne Keothavong, now a tennis pundit for BT Sport, tweeted: "I just don't know what to think or believe anymore. Except, there's nothing to celebrate whichever way you look at it."