Federer, 34, was beaten for the first time in 11 Wimbledon semi-finals.

I showed a lot of emotion - Raonic

Federer appeared to have nullified the Raonic threat and had victory in sight before the Canadian found another level to clinch the biggest win of his career.

He played superbly in the final set, while Federer - playing his second five-set match in three days - required treatment from the trainer twice in the closing stages.

Raonic recently added John McEnroe to his coaching team of Carlos Moya and Ricardo Piatti, and said the American's influence had been significant.

"What he told me was to go out and leave it all out there," Raonic told BBC Sport.

"I showed a lot of emotion, always positive. Mentally I had one of my best matches of my career. He gave me plenty that helped today, so did Carlos Moya. I hope they have a lot more to give me.

"I'll focus on the task at hand. I've by no means done what I came here to do."

Very sad and angry at myself - Federer

Federer was on course for a tie-break at two sets to one up, but lost a 40-0 lead with two double faults in a row.

"I can't believe I served a double fault twice," he said. "Unexplainable for me really. Very sad about that and angry at myself because never should I allow him to get out of that set that easily.

"I mean, he deserved it. He earned it at the end. But I helped him so much to get back into that game."

The 17-time Grand Slam champion suffered a heavy fall in the fifth set, and does not yet know the extent of any damage done.

"I hope I didn't hurt myself," said Federer. "Is it a three‑day thing, is it a 24‑hour thing or is it more? I don't know at this point. I hope it's not so bad. I walked it off. I was able to finish. But I don't slip a lot. I don't ever fall down. It was a different fall for me than I've ever had.

"With the body that's been, you know, playing up this year, I just hope I'm going to be fine. I believe I am, but I'll know more tomorrow when I wake up."

Raonic too strong for Federer in decider

Raonic came into the semi-final with the most aces and the fastest serve in the tournament, but Federer appeared to have done the hard work as he pushed for a decisive break in the fourth set.

The Swiss had offered up the first set thanks to only his third double fault of the tournament but took the second with four straight points in the tie-break, and then clinched the third as Raonic's serve started to misfire.

With a tie-break looming in the fourth, the Centre Court crowd was stunned to see seven-time champion Federer double fault twice in succession on his way to letting a 40-0 lead slip, and then steer a forehand into the perfect place for Raonic to fire a backhand past him.

That gave the Canadian the fourth set and, adrenaline now flowing, he took control.

Federer has struggled with injuries this year and came into Wimbledon with a relative lack of matches, and after having treatment to his thigh before the final set, the Swiss needed another visit from the trainer before dropping serve.

Raonic fired a forehand winner to break for 3-1 as Federer tried desperately to stay alive at the net, but once ahead in the set the Canadian was not about to falter, serving his way to a stunning victory.

What the experts said

John McEnroe, three-time Wimbledon champion: "Think about what that young man has accomplished. Roger Federer was 10-0 in Wimbledon semi-finals before this. Federer is an amazing champion and this was amazing from Raonic.

"It was not just his serve. He showed a lot of heart, a lot of fight and found a gear I'm not sure he even knew he had. He put everything together at the right moment."

Lleyton Hewitt, 2002 Wimbledon champion: "Raonic kept playing big and passed really well on some really important points, and there were also some great pick-up, low volleys. Raonic kept to his game-plan, even after going 2-1 down.

"In the fifth set Roger was stretching wide and not coming back into court as well as he had been. That match against Cilic probably took its toll.

"Federer hasn't played a lot of tennis this year - he pulled out of the French Open leading into this - so there were going to be question marks and that could have been the big difference.

"As soon as Federer went up two sets to one he looked like he had a lot of opportunities and he wasn't quite able to get up that break. To Milos' credit, though, he kept coming at him."

Tim Henman, four-time semi-finalist: "If you've got a serve like Milos Raonic, it's so difficult to break and even when he was ahead, Roger was never really in control of the match. Raonic reacted extremely well on the big points.

"All credit to Raonic, he's played fantastically well the whole grass-court season, reaching the Queens final and maintaining that form at Wimbledon. He will be a threat to whoever he plays in the final." 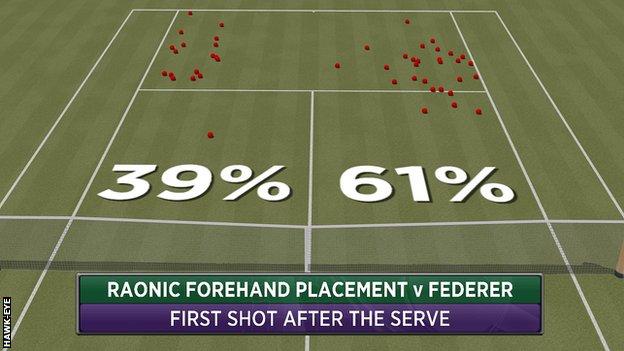 Raonic really punished Federer with heavy forehands, as you can see in this Hawk-Eye graphic. Overall his first shot after serving was a forehand 69% of the time, increasing to 78% after his first serve. In total he hit 26 forehand winners, led by 11 ground strokes and nine volleys.