Some players are studies in perpetual motion, others are all nervous ticks and quirky habits, or pent-up aggression, or canny conductors of the crowd.

Serena Williams on Centre is a queen surveying her court.

Two months short of her 35th birthday, a year since her last Grand Slam title, you might expect a little age or fallibility to be showing through. Both might be there, working on her mind as well as her body, but this is not a monarch preparing for her abdication.

Tuesday afternoon, and a quarter-final against Anastasia Pavlyuchenkova. A 21-time Grand Slam singles winner against a woman who has never been higher than 13 in the world. Because this is Wimbledon, the support is all for the underdog.

If it irritates Williams that her titles, her longevity, her talent and her shock-and-awe groundstrokes are not enough to make her the crowd's favourite, she does not show it.

Roger Federer glides around Centre with leonine grace. Rafa Nadal ricocheted around it like a rubber ball. Williams is so measured in her movements, so regal in her deportment, that she dictates the pace of everything happening around her.

It is half-haughty, half-asleep. As she walks from her chair to receive serve in the opening game, it takes her 23 paces to get from net-post to baseline. For a woman associated with unmatched physical power, each Serena step is surprisingly delicate. People have walked from bedroom to bathroom first thing in the morning at greater pace.

Williams has admitted to feeling sometimes like three contradictory characters in one: the warrior player, the clothes-designing girlie girl, the insecure body-conscious woman.

She has names for them. Summer is all smiles and thank-you notes. Psycho Serena is the on-court competitor. Then there is Taquanda, the angry, out of control one, the one who told a line-judge at the 2009 US Open line judge that she would stick a ball somewhere it is not ordinarily stored.

Even as the great champion Serena remains an outsider

Against a pumped-up Pavlyuchenkova she rules with an almost icy detachment.

Waiting to receive she is almost motionless, swaying only slightly from side to side. Ready to serve she is equally restrained. No bouncing the ball 20, 25 times as Novak Djokovic does, no compulsive wiping of face on towel like Nadal. Two bounces, a cold glare across the net, the sudden simple violence of the serve.

The message is clear: Nothing can disturb me. No-one will hurry me. I am in control. 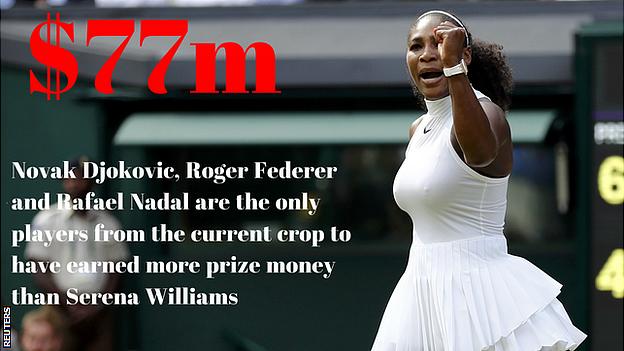 At one point early in the first set a ball-boy scampers to retrieve a stray ball that is rolling into her path. Serena flicks her hand dismissively. Boy and ball scarper.

In her second-round struggle against Christina McHale she was often flustered and frequently angry. In Monday's demolition of Svetlana Kuznetsova, Taquanda almost stepped onto the stage: when she slipped on a damp court and tournament referee Andrew Jarrett initially refused to close the Centre Court roof, Williams fixed him with an admonishing look and muttered, "If I get hurt, I'm suing".

On Tuesday nothing can interrupt her reign, not even the sound of a partisan crowd greeting her best shots with a mixture of sympathetic groans for her struggling opponent and almost desultory applause.

There is admiration rather than adoration, respect rather than worship. A stunning forehand winner that leaves Pavlyuchenkova wrong-footed and splay-legged is greeted by winces. "Jesus…" mutters one well-heeled chap.

If it upsets Serena, if the inequity burns of being the greatest player of the Open era yet having to cede support to a player who has never gone past the quarter-finals at any of the four Grand Slams, she keeps it hidden inside.

Not all could be so impassive. Tennis is not track and field. Williams is a black woman in a white woman's sport. There is great variety in the summer hats being worn around Centre but not on the faces beneath.

If she fears that her sovereignty on Centre is coming to an end, she hides it well

Even as the great champion Serena remains an outsider; even as the established star she is the outlier, the exception as she rules.

Maybe it's nothing more than the underdog thing. In how many of Martina Navratilova's 12 Wimbledon singles finals was she the crowd favourite? Maybe just the last, her loss to Conchita Martinez in 1994, aged 37.

Before that, Centre Court always seemed to eschew her power and glory in favour of the softer or younger - Chris Evert and Andrea Jaeger, Hana Mandlikova or Steffi Graf.

But Williams is not the dominant force she was 12 months ago, when her straight-set victory over Garbine Muguruza gave her a sixth Wimbledon singles title.

Since then she has lost to the unheralded Roberta Vinci in the semi-finals of the US Open, been beaten by Angelique Kerber at the Australian Open having not lost a set to her in four years, and seen Muguruza take her revenge in the final of the French Open despite having dropped only one set en route.

Serena is already the oldest woman in the Open Era to win a Grand Slam singles title. The chances to see her in action are running out fast. If she is still here in two years' time it will be a reduced talent playing reduced tennis. Now is the time to pay homage.

For the moment she plays the same role. If she fears that her sovereignty on Centre is coming to an end, she hides it well. If any of the speed or strength is dropping away, the charisma is still burning at peak power.

And the queen can still lay down the law. Pavlyuchenkova is alive and kicking in both sets at 4-4, only for Williams to twice tear the critical break of serve away from her in the ninth game.

When victory follows, there are no screams, no wild celebrations. Just a single clenched fist, a defiant stare around at her applauding subjects and that same slow, deliberate walk. Her court, her time.