One is a multi-millionaire icon whose name transcends sport. The other has earned £220 this year and had to be persuaded by his other half to keep playing professionally.

On Wednesday they will meet as equals, on Centre Court from about 16:30 BST, in the second round at Wimbledon. Tennis, eh?! What a sport...

How their careers compare 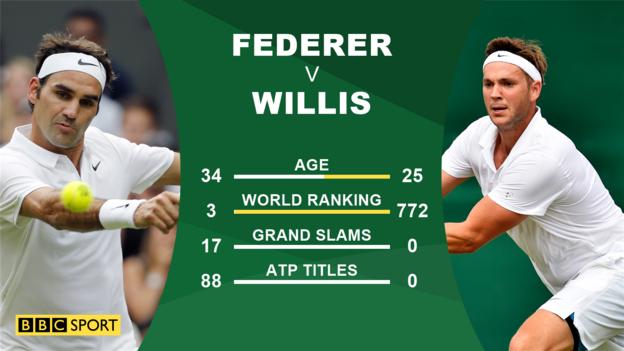 Federer's nickname among his fans is 'GOAT'. As in 'Greatest Of All Time'. And he has the numbers to back it up.

The 34-year-old Swiss has won an all-time record 17 Grand Slam titles, reached 27 Grand Slam finals, 23 consecutive semi-finals and 36 consecutive quarter-finals. He is one of only eight men to complete the career Grand Slam.

Willis? Since turning professional, he has moved up and down the world rankings - reaching a high of 322 in the summer of 2014.

But the 25-year-old plummeted down to 479th at the turn of the year, eventually dropping to 785th by the start of last month.

His trophy cabinet does not contain any ATP titles, just a handful of lower-level Futures titles.

Saying Federer has made a handsome living as a tennis player would be an understatement. Winning those Grand Slam titles and 88 ATP Tour triumphs has raked in the second-most career prize money ever.

Willis, who still lives at home with his parents in Berkshire, has made a more modest living. The Briton's earnings are more than 1,000 times less than Federer's. 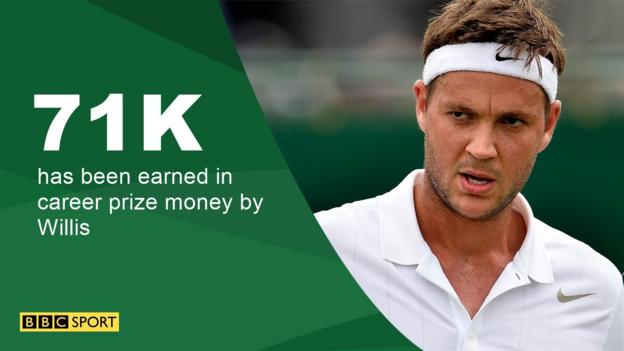 Federer is the fourth most followed tennis player on Twitter - behind Rafael Nadal, Novak Djokovic and Serena Williams - with 5.5 million people hanging on his every tweet. That's almost three-quarters of Switzerland's entire population.

You will not be surprised to hear Federer has a global fan base on social media, while few outside of the United Kingdom follow Marcus Willis.

The map below shows Federer's followers have tweeted from across the world (the top map), including almost all of Europe and swathes of Asia, North and Central America and Africa.

Willis's followers (the bottom map) are almost entirely based in the UK. 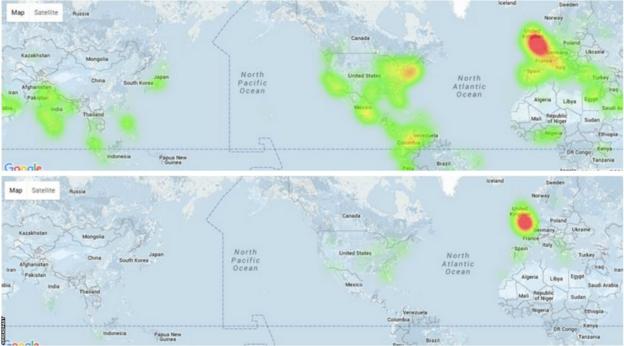 Over on Facebook, Federer's following dwarfs Willis' by an even bigger margin...

Rather befitting of the man who it is publicising, Federer's official website is a sleek little number which has over 350,000 signed-up members.

You can find out everything about his career achievements, a bit about the man himself and have a browse around his online shop. That even contains a 1000-piece jigsaw of Fed in action at Wimbledon. 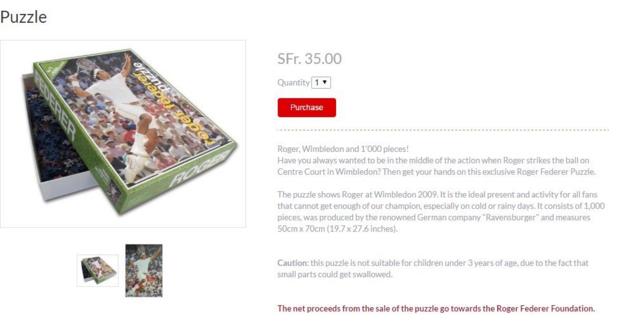 Willis' online offering is more rudimentary. Unfortunately it does not appear to be regularly updated by an army of savvy media types. The 25-year-old still listed as being aged 23 and is described as the British number seven when he has since dropped to 23. Nor can you - unlike on Federer's website - buy any signed tennis shorts. 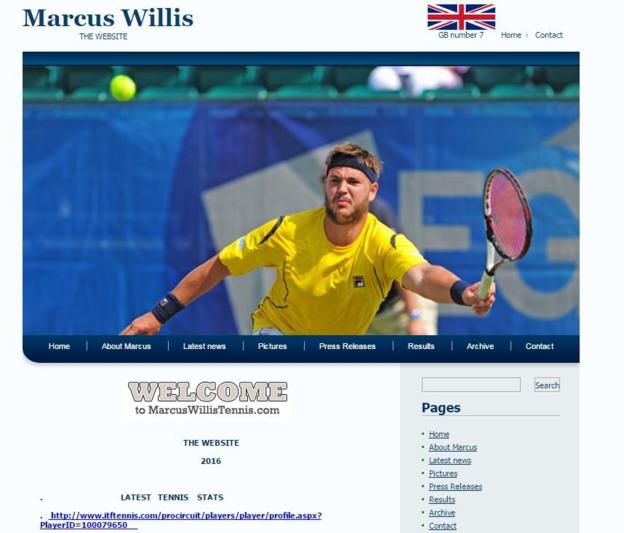 Other ways the players raise money

As well as the money from his tennis, Federer also supplements his finances with several lucrative sponsorship deals.

He endorses a Swiss bank, luxury chocolate and champagne brands, high-end German car manufacturers, as well as some of the world's leading sports brands.

Willis has no such fortune.

In the summer of 2014, he even set up a pledge website page to raise money to fund his career.

The target was fulfilling his "ultimate dream of playing at Wimbledon" the following year. He raised £2,185 and did not reach SW19. This year he finally made it...

By his own admission, Willis was - shall we say - not quite treating his body as a temple. That was despite being an active tennis player.

He reckons his weight crept up to 115kg (over 18 stone) in November 2014, calling himself 'Cartman' on Twitter in reference to the South Park character and using #tubster on his Twitter posts.

But then he decided to cut down on the booze and junk food, losing about 30kg over a seven-month period.

Federer has played more like machine than man over the years. And that means he eats and drinks like a saint.

So what's on the menu? A high-carbohydrate, low-fat, low-fibre meal - like low-fat milk and cereal, pancakes with syrup, pasta or rice - is served before a match. And he recovers after a match with lean protein foods

Does Fed like an alcoholic tipple? Not very often. Although he has been known to down a shot of tequila...

The Fed Heads v The Will Bombers

Federer is backed by a breed of fan that tennis has never seen before - a multinational travelling troupe of diehards for whom the sport is secondary to the man himself. They are the 'Fed Heads'.

These fans spend thousands of pounds each year following their hero, travelling from far and wide to see him glide across the baseline. 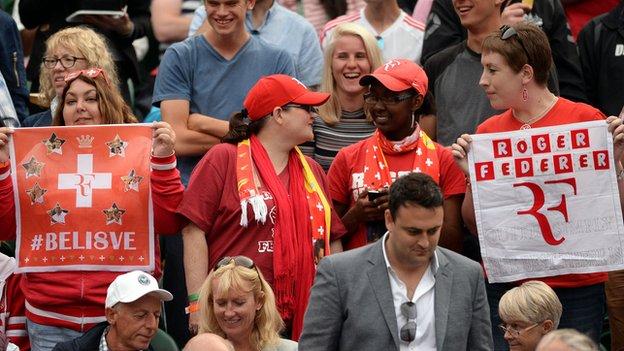 While the Fed Heads purr at every stroke played by the elegant Swiss, gently breaking out into "oohs" and "aahs", the Briton's fans are rather more vocal.

Willis was roared onto victory in his first-round match by a boisterous pocket of people tucked into the corner of Court 17.

But they hadn't travelled from far-flung places across the globe. They came from Berkshire. And Loughborough University, where he used to study. "They have all been my friends for a long time," he said afterwards. 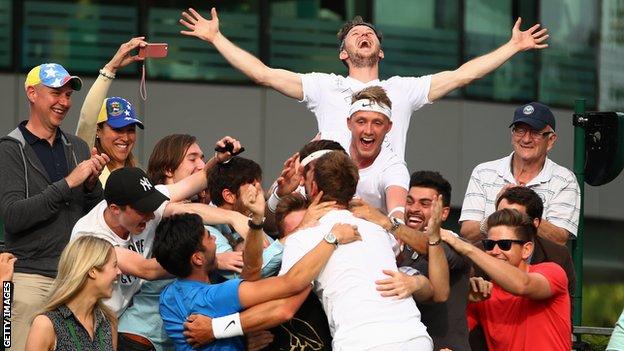 So is there a danger that Federer might have even more vocal support than Willis? Not according to Tim Henman.

"The reality is that wherever Federer plays in the world he has unbelievable support," said the former British number one.

"But for Willis to get to this stage, and being a home player, he will have great support. It will be a brilliant atmosphere."

What the players say about each other

Willis after discovering he will face the seven-time Wimbledon champion: "I'm not sure he can play on grass!"

Federer on learning he play the first-time Wimbledon entrant: "I'm not sure I've played someone this low in the rankings."

Willis on whether he had ever spoken to Federer: "I don't think I have. I don't think he was at Tunisia F1 Futures this year! So, no, I haven't."

Federer on the challenge posed by Willis: "He is serve and volleying which I love to see. He came up with some great shots."

Willis on his chances: "I'm going to go out there and try to win the tennis match. I probably won't."

Federer on Willis's rise: "It's one of the best stories in a long time in our sport. This is the kind of story we need."

Can Willis cope with playing on the big stage?

Willis had never even played at Wimbledon before Monday's shock win against world number 54 Ricardas Berankis.

Now he will be strolling out on to Centre Court in front of 15,000 people.

"He has to try to visualise himself walking out there so he doesn't spend the first 25 minutes looking around," said Henman.

"If he does that then he will be down a set and a break fairly quickly."

Fellow BBC Sport commentator Andrew Castle added: "My advice would be smile, enjoy it and realise that whatever happens it will be over in a couple of hours. He has to just go for it."

Has Willis any chance of shocking Federer?

It goes without saying that Willis is the rank outsider, with some bookmakers offering odds as short as 1-250 on a Federer win.

Former Wimbledon semi-finalist Henman and Castle are not banking on seeing a seismic SW19 shock.

Castle added: "I think this will be a step too far. But what's the worst can happen? If Iceland can beat England at football then maybe Marcus Willis can beat Roger Federer."