A win against the Spaniard, 22, would see Williams defend her title and equal the Open-era record set by Steffi Graf in Paris 17 years ago.

Saturday's showpiece is a repeat of last year's Wimbledon final, which Williams won in straight sets.

"The only thing I can do is just play to win the tournament and that's it."

Muguruza is entering only her second major final but did hand Williams her heaviest ever defeat in a Grand Slam - 6-2 6-2 in the second round at Roland Garros in 2014.

Williams said of that loss: "I learned so much from that match.

"I hate to lose, but when I do, I hope it was worth it. That match was definitely one of those that was kind of needed and worth it." 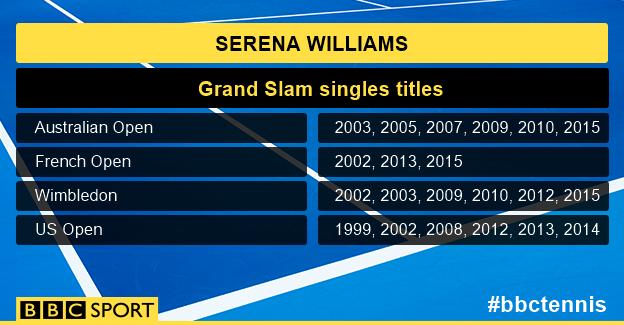 Williams looked out-of-sorts in her semi-final against unseeded Kiki Bertens, but came through 7-6 (9-7) 6-4, while Muguruza cruised to a 6-2 6-4 win over former finalist Sam Stosur of Australia.

Williams' coach Patrick Mouratoglou said after her victory that the "keys of the final" are in the three-time champion's hands.

Muguruza responded by saying: "I think that she and I are players who like dictating the game. If the coach says that the victory is in the hands of Serena, OK. He's allowed to say that.

"But I think I'm going to fight for each point. There will be moments when she'll be dominating, and maybe at times I will be dominating. I think I can be a tough opponent, too."