Britain's Andy Murray gave himself the perfect birthday present as he won his first Italian Open title with a 6-3 6-3 victory over Novak Djokovic.

It was a first win on clay against Djokovic in five attempts for the Scot, who turned 29 on Sunday.

He broke serve once in the first set and twice in the second in Rome to win in one hour and 35 minutes.

Murray will return to second in the world rankings before the French Open, which begins on 22 May.

He broke the world number one early in the first set, leaving Djokovic - who beat the Scot in last week's Madrid Open final - visibly frustrated and exchanging words with umpire Damian Steiner. 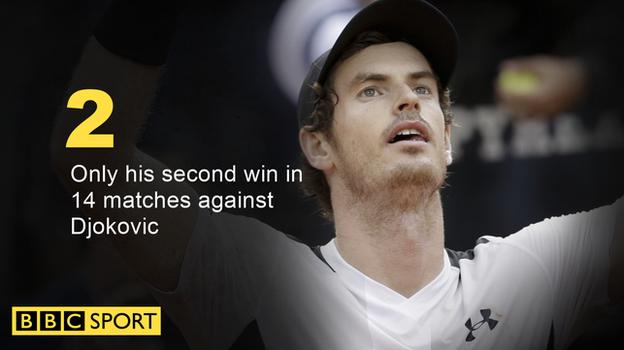 Murray then fought back from break point down to hold serve in the second set, before staving off another two in his next service game.

A frustrated Djokovic, 28, complained rain was making the Foro Italico surface "too dangerous", but he was told to continue by umpire Steiner, and Murray immediately broke the world number one.

Murray then moved within a game of victory and the pressure started to tell on Djokovic.

Serving to stay in the contest, the Serb double faulted to hand Murray match point and the Scot duly closed out the win with a fantastic backhand winner from well out of court.

The win was only Murray's 10th in 33 matches against Djokovic and, having beaten world number five Rafael Nadal at the Madrid Open last week, he says he will head to Paris for the French Open feeling confident.

"Each time I go up against him [Djokovic], I know I have to play a great match to win," said Murray.

"I've had great preparation now going into the French Open. I have played against Rafa a couple of times, Novak a couple of times. You know, not won all of the matches, but competed extremely well even in the ones I have lost.

"[I'm] going to Roland Garros with a lot of confidence. Over best of five, as well, takes a little bit more physical and mental strength.

"But I feel like I'm on the right track. So hopefully I can have a good run there."

Murray's long wait for a clay court title ended in Munich last year, which he followed up a week later by winning the Madrid Masters, and he now feels at home on the surface.

"The finals of a Masters Series on clay again is something that's a new experience for me," he added.

"It's not really something I have done throughout my career, so it's nice to still be achieving new things and reaching new goals at this stage of my career.

"The last couple of years, clay has probably been my most successful surface. I never expected that to be the case, but I'm not complaining about it."

Sunday's Italian Open victory was also Murray's first title since the birth of his daughter, Sophia, in January.

"The last thing I looked at before I went on court today was a picture of my daughter," Murray said.

"I feel like that's what I'm playing for now, so that in a few years hopefully she can be proud of what I have achieved."

'Ridiculous' to continue in the rain

Djokovic was visibly frustrated with umpire Steiner's decision not to pause the match while rain fell in Rome, asking if "somebody must get injured" before it would be stopped.

"I didn't see any reason why we couldn't stop the game for a little bit until we get the court in a proper condition to play," said the world number one.

"We played on a very heavy court because it was raining for an hour and it was very muddy behind the baseline. In three games I literally could have twisted my ankle two or three times.

"To me it's also ridiculous that the chair umpire, who doesn't wear tennis shoes and wears the casual shoes, comes out and just slides on the line and says "okay, the court is good" or not.

"If you keep on going for the reasons that are only familiar to himself, then the risk for an injury is much higher than it can be."

But Djokovic admitted emotions got the better of him in a game where "there is a lot at stake".

He added: "These kind of matches are important for for both players. Obviously when you get to play a rival, and of course you want to win, sometimes you get too emotional."

"Murray imposed himself on the match from the start - in stark contrast to recent meetings with the world number one. He was the aggressor, backed up by a fine first serve, which is becoming a very potent weapon.

"To have won Rome, finished as runner-up in Madrid, and reached the semi-finals in Monte Carlo is fabulous preparation for Roland Garros - and to beat Djokovic for only the second time in 14 meetings a big psychological boost.

"This was a defeat, though, that Djokovic can put into perspective. While Murray was in a much easier half of the draw, the world number one had to beat Rafael Nadal in the quarter-finals, and did not finish his three-hour semi-final with Kei Nishikori until 23:30 CEST on Saturday night."