The first point of Leon Smith's reign as Davis Cup captain was scored by Jamie Baker in Eastbourne in July 2010. His opponent was Turkey's world number 866 Ergun Zorlu.

Great Britain won every match that week to avoid dropping into the competition's fourth division, but the top tier World Group - let alone the giant sterling silver cup which Dwight Davis lent his name to in 1900 - was a distant dream.

Smith was 34 when he took over the captaincy from John Lloyd. Greg Rusedski had appeared an obvious choice - with 30 wins from 20 Davis Cup ties and a Grand Slam final on his resume - but the Lawn Tennis Association preferred the Scotsman who had spent five years coaching Andy Murray as a junior.

The news came as quite a surprise to Smith himself. He had been good enough to play junior tennis at national level, but would not be able to draw on personal playing experience to coax the best out of his Davis Cup teams. 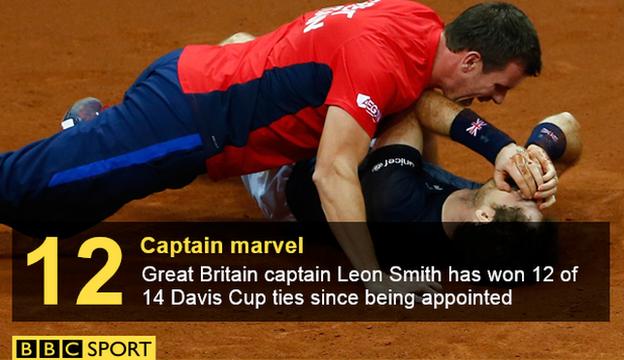 "You have to sell your case to the players," he said.

"And for me that meant doing a lot more preparation for each tie. That meant scouting the opponents to make sure that every detail was accounted for.

"We had to try and do something with the ranking deficits we were up against. You've got quite a lot of practice sessions in a week: you've got time on your hands with two sessions a day, every day, so rather than just hit balls we thought let's make sure we try and coach them."

Smith drafted Louis Cayer onto the coaching team, a man he describes as "much, much, much more" than a doubles specialist and someone with the experience of both coaching and captaining Canada's Davis Cup team.

And he also hit the road - shrugging off the nickname of 'permatan' - to spend as much time as possible with the players and their coaches: in a bid to discover the language they would best respond to on the practice court and in the chair, in the heat of competition.

Smith's other great attribute is his relationship with Andy Murray. Andy's mother Judy entrusted her son's formative years to Smith when he was just 21 years of age.

"He was very different back then," Andy Murray recalled before last year's quarter-final tie against Italy in Naples.

"He was a little bit bigger and had a little hoop earring. No, no it was a stud. And some blond highlights in there, and spiky hair."

Smith knew Murray would eventually return to the team, and after Colin Fleming, Jonny Marray, James Ward and Dan Evans had engineered the unlikeliest of comebacks to beat Russia in Coventry in April 2013, the moment arrived.

Murray rejoined the team, Croatia were beaten in Umag, and Britain returned to the World Group.

Smith has a strong sense of loyalty to all 12 players he has selected since 2010, but the choice of personnel for each tie is made dispassionately. Form is the greatest influence, but when the options are limited, his gut feeling has rarely, if ever, let him down.

Dom Inglot was the unlucky man to drop out of the squad on the eve of the final in Belgium, but says the captain is a man you really want to play for.

"He keeps the team really relaxed, he doesn't seem to have any sort of ego and he can make fun of himself," said Inglot.

"And you feel like every member of the team is equally important. As a player you want to play for someone like that - someone who really treasures your input no matter if it's on the bench or on the court."

A successful defence of the Davis Cup, which starts with a home tie against Japan in March, would be an even more remarkable achievement in a year where the Olympic Games will prevent Andy Murray, and many others, from playing in all of the ties. So what does the future hold for Smith?

He has so far deftly ducked questions about his future - and about becoming a Knight of the Realm. Coaching full-time on the ATP Tour would no doubt appeal, but that is a huge commitment to make as the father of three young children.

A role as Scotland's national coach is one he would covet, but other offers may come from further afield.

It would be deserved recognition for the meticulous planning and canny execution of a project which began on a hot weekend in Eastbourne some five and a half years ago.