Briton Johanna Konta's remarkable US Open run ended with defeat by fifth seed Petra Kvitova in the fourth round.

Konta, 24, had only won one Grand Slam main draw match before arriving in New York this year.

She is projected to rise from a ranking of 97 to inside the world's top 60, just behind British number one Heather Watson.

"I don't even know what Heather is ranked right now - that's not something I actively look at," said Konta. "It's not my most important goal."

The defeat brought an end to Konta's winning run of 16 matches that stretched back to the first round of Wimbledon.

She might have been playing by far the biggest match of her career, but Konta retained the composure that had got her there as she tested the fifth seed. 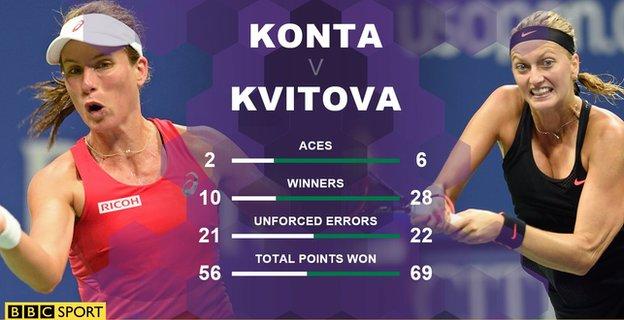 A match of fine margins came down to Kvitova taking both of her break points, albeit thanks to double faults, while Konta converted none of five.

"From the beginning of the match I was the worst player on the court, but somehow I managed to keep my serve on and wait for my chance," said the Czech.

It was Konta who made the running in the first set but she could not take advantage of break points in the first, fifth and ninth games.

Kvitova, on a seven-match winning streak, earned her first chance at 6-5 and Konta wobbled for the first time with a double fault.

The Briton did not crumble, calmly working her into the second set behind some good serving only to leak a forehand long in game eight.

Another doubt fault followed, and Kvitova wrapped up the win on serve after one hour and 28 minutes.

"I wouldn't call it stage fright," Konta said of the double faults that made the difference.

"I think if it were stage fright we would have seen it at the beginning of the match. I actually settled quite quickly and enjoyed being out there."

And despite the defeat, she was able to enjoy the experience of opening a New York night session.

"My mum actually reminded me when I was speaking to her yesterday that when we were here back in 2007 for juniors, I said: 'This is like the most amazing stadium.' I completely forgot about that.

"I guess I had a little childhood dream come true, so that's pretty special."

Keen to get back on court

Since losing to Maria Sharapova at Wimbledon, Konta has won two titles on the lower challenger level, three matches in US Open qualifying and three in the main draw.

Having broken into the top 100 over the summer, she is likely to rise to around 58th when the new rankings are released at the end of the tournament.

She collects a cheque for £141,000 - four times her previous best - and should gain direct entry into the Australian Open in January for the first time.

The 24-year-old now plans to return home to Eastbourne before resuming training and then heading to Wuhan and Beijing in China, as the tennis circuit moves on to the 'Asian swing'.

"I'm not blown away by my performance here," said Konta. "I'm just satisfied that I get a little bit of candy for doing well.

"I'm just really looking forward to heading already to my next tournament.

"Obviously I need to take a little bit of a break now, just a couple days' rest, but I'm looking forward to the next plane I'm on to head to Asia."