Venus Williams is prepared to end her sister's attempt at a first calendar Grand Slam when she meets Serena in the US Open quarter-finals.

The sisters will play each other for the 27th time when they open the night session at 00:00 BST on Wednesday.

Serena, 33, has not lost a Grand Slam match since Wimbledon 2014 and hopes to win the first calendar Slam since 1988.

"No-one is out to be a spoiler, but at the same time you're focused on winning your match," said Venus, 35.

But she added: "I think people love to see history being made."

Serena ready to face 'the best'

Serena is in the process of rewriting the tennis history books as she closes in on a 22nd major title, a record seventh US Open and fourth in a row, and matching Steffi Graf's achievement of winning all four in 1988.

The world number one's last Slam defeat came against Alize Cornet at Wimbledon last year, since when she has racked up 32 wins at the major events.

The 25th of those victories was against Venus in the fourth round at Wimbledon - Serena's sixth in the last seven of a professional rivalry stretching back to 1998.

"I'm playing, for me, the best player in the tournament, and that's never easy," said Serena, who leads the overall head-to-head 15-11.

"She's beaten me so many times. I've taken a lot of losses off of her - more than anybody. 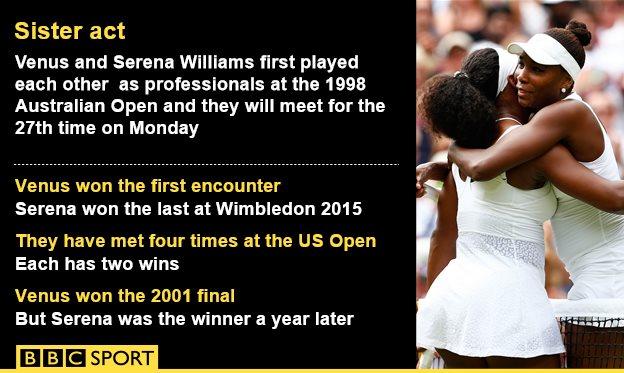 The victorious Williams sister will play the winner of the rather less heralded quarter-final between unseeded duo Kristina Mladenovic of France and Italian Roberta Vinci.