Jo Konta ended last year at 150 in the world, but will become a top 50 player and replace Heather Watson as the British number one if she beats Petra Kvitova in the fourth round of the US Open on Monday.

The odds may be against a woman who had won only one Grand Slam match in her entire career before this week, but confidence is a wonderful thing. After victory over the Wimbledon runner-up Garbine Muguruza and the 18th seed Andrea Petkovic here in New York, Konta has now won 16 matches in a row.

The 24-year-old, who was born in Sydney to Hungarian parents, settled in the UK 10 years ago. She has been a British citizen since May 2012, but has always played third fiddle to Watson and Laura Robson, who has twice reached the last 16 of a Grand Slam and won the Wimbledon junior title at just 14.

Conquering the nerves has been key

Konta had to come through three rounds of qualifying just to reach the main draw, but has appeared totally in control of her emotions at Flushing Meadows and has given no hint of the anxiety which used to mask her true ability.

Shares in her mental resilience coach Juan Coto must be rising as rapidly as those controlled by some of the hedge fund managers he also works with.

"We see each other when she is in the UK, and occasionally I also go to tennis tournaments," Coto told me.

"When she's away we communicate either by Skype, but most recently we have had short discussions and coaching sessions using WhatsApp - which seems to work very well.

"You need to be humble, and to accept that a mental coach can help you. You also need to be courageous to try different ways of thinking and behaving, and finally you need to be disciplined to consistently train mentally."

Britain's Fed Cup captain Judy Murray feels Konta's heavy defeat in a match against Belarus in the preliminary stage of the competition in February was a catalyst for change.

"She had a bit of a horror," the captain told BBC Sport.

"She suffered from really bad performance anxiety and she lost that match very, very quickly and was distraught afterwards. But it really was a question of her recognising that she needed to do something to help her to control her emotions and her mind."

A chance to switch off

Konta has always had a reputation as a very diligent professional, but Murray thinks there may also be another reason for her unprecedented run of success.

"I think she's travelling a bit more with her boyfriend and I think that's helped also because it means you've got switch-off time from the tennis," she said.

"You can go out and do relatively normal things and I think that helps you to stay much more emotionally stable. So I think the package around her has really helped her to be much more in control of what she wants to do on the court."

Kelsey Anderson - the wife of world number 14 Kevin - is a big advocate of the benefits of a travelling partner. After much deliberation, she chose to give up her career as an accountant and accompany Kevin on tour full-time. 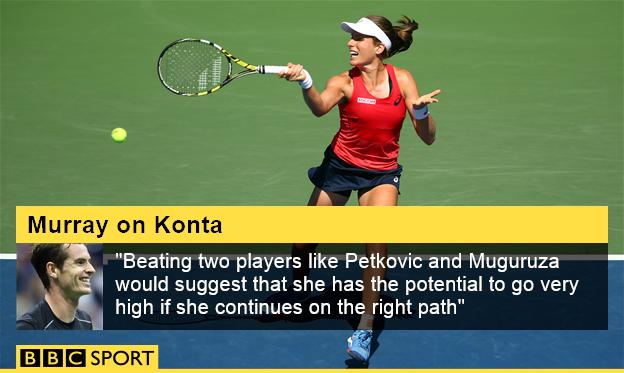 "For morale, I think it's great: it plays a huge, pivotal part of a player's success if it's a stable and positive relationship," Kelsey told me in the run-up to her husband's fourth round match with Andy Murray.

"It's just such a fun experience to be able to share that part of your life with the person you care about the most. If you're spending time on court with your coach all day, your brain doesn't really get a chance to shut off and it's nice to have somebody non-tennis specific to mediate the energy and the atmosphere a little bit."

For Konta, the puzzle is now starting to knit together very nicely.

The shock of a dramatic cut in her LTA funding for 2015 encouraged her to move her training base to Gijon in northern Spain, where Esteban Carril and Jose-Manuel Garcia have overseen at first a steady, and now spectacular, rise up the rankings.

Supporters of the LTA's austerity drive herald the benefits of tough love.

Would Konta have made the changes and progress she has, they argue, if still was wrapped in the comfort blanket of governing body funding?

Despite her underdog status, it is worth pointing out that victory over Kvitova will make Konta the first British woman to reach a Grand Slam singles quarter-final since Jo Durie at Wimbledon in 1984.

"My locker is right above Petra's, funnily enough. I feel very, very fortunate and blessed that I get to play against such a great champion as her."