World number eight Rafael Nadal is out of the US Open after losing a five-set, third-round thriller to Italian Fabio Fognini at Flushing Meadows.

It is the first time the 29-year-old - twice a US Open champion - has lost in a Grand Slam having been two sets up.

Fognini, 28, faces Feliciano Lopez of Spain in the fourth round.

Earlier this year, Nadal lost in the quarter-finals of the Australian Open to Czech Tomas Berdych and the last eight at the French Open to Serbian world number one Novak Djokovic, before he was eliminated in the second round of Wimbledon by German qualifier Dustin Brown.

It is also the earliest Nadal, who was seeded eighth, has been eliminated from the US Open since a third-round exit at the hands of American James Blake in 2005.

"The only thing this means is I played worse than the last 10 years," said the 14-time Grand Slam winner. "That's the real thing. By the way, for me it was amazing to win 10 years in a row a Grand Slam.

"You can imagine how difficult it is to make that happen. I have to accept that it was not my year and keep fighting till the end of the season to finish in a positive way."

Clay court specialist Fognini, who had lost his last seven matches on hard courts coming into this tournament, played magnificently from the third set on against an opponent he had beaten twice this season but lost to in the final of the Hamburg Open in August.

In a gripping final set, the two traded seven service breaks in a row, before Fognini brought the three hour 46-minute tie to an end shortly after 01:00 local time.

"I can't describe how happy I am," said Fognini. "It was very tough. To do it against Rafa, two sets down - it was an incredible match."

Fognini is in to the fourth round at Flushing Meadows for the first time and is the first Italian man to reach this stage at the US Open since Davide Sanguinetti 10 years ago. 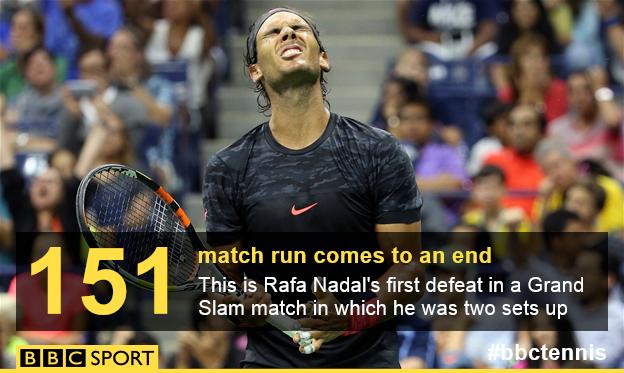