Andy Murray has beaten veteran hardcourt specialist Mardy Fish to secure his place in the third round of the Cincinnati Masters.

The Scot will now face Bulgarian Grigor Dimitrov in the next round.

Fish recently spent 18 months out of the game with a heart condition and will retire after the US Open.

However, he held his own in the first set against Murray and managed to force a second-set tie-break having surrendered a 4-3 lead. 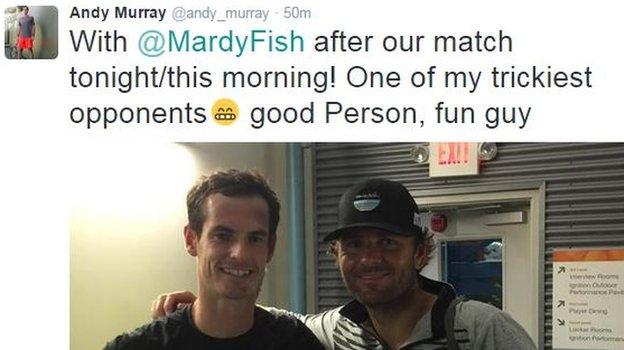 Murray tweeted that Fish had been "one of my trickiest opponents" who had "been very unfortunate these last few years" as he wished him "all the best for the US Open and your life after tennis".

The British number one's next opponent, Dimitrov, enjoyed the benefit of a day's rest having beaten Vasek Pospisil in the second round on Tuesday.

The 24-year-old has beaten Murray twice in seven meetings, knocking him out of Wimbledon in 2014 and winning a semi-final in Acapulco earlier the same year.

World number one Djokovic, for whom victory here would complete a career clean sweep of all nine ATP 1000 Masters titles, booked his place in the third round with 7-5 6-2 win over France's Benoit Paire.

Elsewhere, Spain's former world number one Rafael Nadal was made to work hard for his 6-3 6-4 win over Jeremy Chardy, finally getting past the Frenchman by converting his fifth match point.

Switzerland's French Open champion Stan Wawrinka was given a scare by world number 38 Borna Coric as he came from a set to down triumph 3-6 7-6 (7-3) 6-3 in nearly two and a half hours.