Britain will host Australia in the semi-finals on 18-20 September, with a venue to be chosen by early August.

"It obviously feels unbelievable to get through that - it wasn't looking great in the second set," said the Scot, who teamed up with brother Jamie to win Saturday's doubles match.

"I just managed to find a way and used up all my last ounces of energy."

Murray off the canvas

Britain's hopes were hanging by a thread when Simon led by a set and a break, with Wimbledon semi-finalist Richard Gasquet lined up to play world number 89 James Ward in a possible deciding rubber.

Simon had won just two of his previous 14 matches against Murray but had prevailed in their most recent meeting earlier this year, and he played beautifully to earn his lead.

The world number 11 exposed the fact that Murray was playing for a third straight day by relentlessly moving the Scot around, firing heavy groundstrokes into the corners.

When Murray fell to his knees after losing a gruelling 35-shot rally deep in the second set, it appeared as though his challenge might be over.

However, a brilliant forehand brought him back into the game and he finally broke serve to level at 4-4.

Simon forged ahead again in the tie-break, leading 4-1 as both men struggled to hold serve, but a backhand and two volleys hauled Murray back once again.

The Frenchman could only find the net at 5-5 and Murray cracked down a big serve to grab the set and send the home crowd wild.

Murray surged into a 3-0 lead in the third and held off a flourish of resistance from Simon, and when the Frenchman slipped over for the second time while dropping serve early in the fourth, his challenge was all but over.

The home crowd roared Murray to the finish line as he closed out the match with a love set after three hours and 26 minutes.

"I just tried to change my tactics," said the 28-year-old Scot. "I was making too many mistakes and Gilles was playing so solid. I said just chase every ball down. I didn't care how I played, I just wanted to win the match today and that's what I did."

Simon said: "I just felt the match was not for me today. I tried my best from the first to last point and I was in position to be two sets to zero up, but in the end I just missed a little something."

A disappointed French side were gracious in defeat but, when asked, had some harsh words for the Queen's Club court.

There were numerous falls over the three days, with Simon twisting a knee and an ankle in two tumbles on Sunday.

France captain Arnaud Clement said the court was "a bit dangerous", but a more forthright Simon added: "It is the most slippery court that I've played on. In almost 10 years of playing on grass I almost never fell.

"Today I was down four or five times and I had to pay attention on every step from the beginning of the warm-up.

"I was surprised to be down that often but it was the same court on both sides. He had to fight also to stay stable on the legs. I lost a few key points because of that, but that's part of the game."

Let us not be accused of allowing the dust to settle - let's talk semi-final venues for the home tie from 18-20 September.

It needs to have a capacity of at least 8,000 and submissions must be with the International Tennis Federation by "early August", although extensions are not unheard of.

The Emirates Arena in Glasgow, which hosted the first-round win over the United States, held 7,700 for that tie.

Wimbledon's Court One has been a Davis Cup venue in the recent past, but the slow hard courts used in Glasgow might be just the thing to nullify the power of Nick Kyrgios and the grass-court guile of Lleyton Hewitt.

Captain Leon Smith was playing his cards close to his chest, saying: "As a group we'll talk about it over the next couple of days, because it has to happen quite quickly in terms of finding venues that are available."

Murray was prepared to stake an early claim for Glasgow, adding: "I would imagine at that time of year it would have to be indoors, for sure, so you would expect a great atmosphere.

"It doesn't matter where the tie is played, it's just about getting the crowd into it, and when we played in Glasgow this year the atmosphere was incredible. You could say that they deserve it because of how great a job they did there." 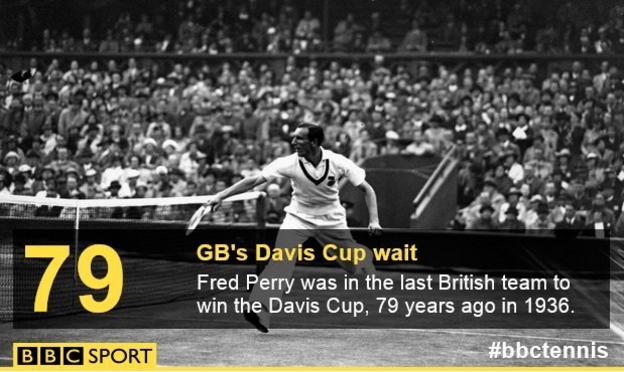 Bring on the Aussies

The semi-final will see old foes Britain and Australia meet for the 13th time, with the Aussies 8-4 in front and having won the last three.

A pair of brothers were behind Britain's last victory in 1978, when John and David Lloyd helped the home side to victory at Crystal Palace.

On the face of it, the Australians will arrive in September with brilliant young talent and the experience of a former world number one at their disposal.

They will also hope to carry the momentum of their first win from 2-0 down in 76 years after Hewitt sealed a 3-2 victory in Darwin on Sunday.

However, with Kyrgios dropped after a lacklustre day-one effort in their quarter-final, Thanasi Kokkinakis still in the early stages of development, and Bernard Tomic absent altogether having been arrested in Miami last week, the 34-year-old Hewitt could again play a pivotal role.

"It was not the tie for the young boys but their tie is coming," a protective captain Wally Masur said after victory in Darwin. "Give them a bit of love."