Federer, 33, currently shares the record of seven wins with Pete Sampras and victory would make him the oldest Wimbledon winner in the Open Era.

"I have played Roger many times and he is one of my greatest rivals," Djokovic said. "We all know how good he is." 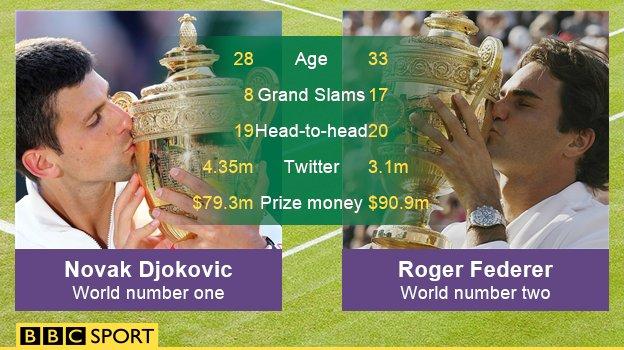 Federer is into a record 10th Wimbledon final after sweeping aside Britain's Andy Murray in straight sets to maintain his 100% winning record in semi-finals at the All England Club.

He is three years older than Arthur Ashe was when he won Wimbledon in 1975 and the oldest man in a final since Ken Rosewall, who was 39 when he lost to Jimmy Connors in 1974.

The Swiss second seed has been in imperious form, dropping only one set and one service game in his six matches so far at the tournament. He faced only one break point against Murray, in the first game.

"I need to keep it up for one more match to really make it the perfect couple of weeks," Federer said.

To do that, he must overcome the Serbian world number one, who trails 20-19 in their head-to-head record since 2006 but has beaten Federer twice already this year.

Both players will have something to prove on Sunday according to BBC Sport analyst Andy Roddick, who lost three Wimbledon finals to Federer.

"Roger has been turning back the clock and, if he wins, we will be saying that he has never looked better," Roddick said.

"For Novak, it is about getting over the disappointment of losing the final of the French Open.

"Federer is in better form but Djokovic can say to himself that he is still going to establish himself as the number one player and he doesn't have to play well for the whole two weeks do it - he just needs to get himself in a position to succeed on Sunday."

Djokovic took almost four hours to beat Federer in a thrilling five-set encounter in last year's final, and Roddick is expecting another memorable encounter this time.

"There is almost no way for this not to be an impressive match," Roddick added.

"If one of these guys comes out and wins in straight sets then we are going to be saying 'what an amazing performance'.

"If it goes past three sets and they are throwing punches for three, four or five hours then that will just be part of the script of what we are used to seeing at Wimbledon.

"It is just perfect when you get the best theatre in the best venue, because it creates magical moments.

"There are rarely any one-sided men's finals here. The only one that comes to mind, apart from maybe my defeat to Roger in 2005, was when Lleyton Hewitt beat David Nalbandian in 2002 and that was kind of a romp from the beginning."

Wimbledon 2014 - a big moment for Djokovic

Djokovic ended an 18-month drought in Grand Slams by winning last year's final and celebrated by eating a handful of grass that he had plucked from Centre Court.

"It was a very important match for me to win because I've lost quite a few Grand Slam finals," Djokovic said.

"To win that match in five sets against Roger on grass was definitely something that gave me a lot of confidence.

"A few days after that, I got married. That was more than a few things that happened in a positive way in my life.

"Of course, I became a father as well, entered a new dimension of joy and happiness and love.

"I'm trying to stay on that wave as much as I can and hopefully I can do well on Sunday."

Federer says what happens 12 months ago will not play on his mind as he prepares to walk out on Centre Court.

"I don't really think about the match we played against each other last year," Federer said. "I just remember it was unbelievably thrilling and the crowd really got into it.

"It's great to play Novak anywhere these days because he's a great player. He's had great success, unbelievable success actually, throughout his career but especially the last few years, he's been unbelievably dominant.

"I'm just happy personally for myself to be back in a final. That it's against Novak, the world number one, it obviously adds something extra."