Defending champion Novak Djokovic reached the quarter-finals at Wimbledon by completing his comeback from two sets down to beat Kevin Anderson.

Djokovic had levelled at two sets all when bad light stopped play on Monday.

He struggled to find his rhythm when the match resumed on Tuesday after a delay because of rain.

"Kevin served exceptionally well," said Djokovic. "This was one of the most difficult matches I have played at Wimbledon in my career.

"It was high-quality tennis in the fifth set. At times I was helpless with my return - it was very difficult to read his serve and he was very aggressive.

"I was two sets down and coming back to win gives me great satisfaction and confidence for my next challenge."

Djokovic was on top when play was halted on Monday but he took time to get into his stride after returning to Court One to fight out the deciding set.

The match was delayed by half an hour because of rain but Anderson quickly got his booming serve into gear, firing down three aces in the first game.

In contrast, Djokovic had to fight to avoid being broken early on, and his frustration was obvious as another shower threatened to bring another pause in play only for the rain to quickly pass.

In the sixth game of the deciding set, Djokovic appeared to aggressively shout 'Towel' at a startled ball girl after a a 20-shot rally concluded with him netting with a forehand.

Djokovic said: "I'm sorry. There was nothing towards her. Maybe she was just afraid of my screaming there. I'm definitely going to try to apologise to her if I did something wrong."

It was not long until Djokovic had Anderson in trouble when the 6ft 8in right-hander saw his serve falter for the first time.

Two double-faults at 5-5 gave Djokovic his first chance to break in the decider, and he did not miss his opportunity.

He held his arms aloft and blew a kiss towards the sky after serving out his victory after 44 minutes back on court, in a match that lasted a total of three hours and 46 minutes.

Djokovic will play ninth seed Marin Cilic in the last eight. The Croatian also took him to five sets when they met at the same stage at SW19 in 2014. 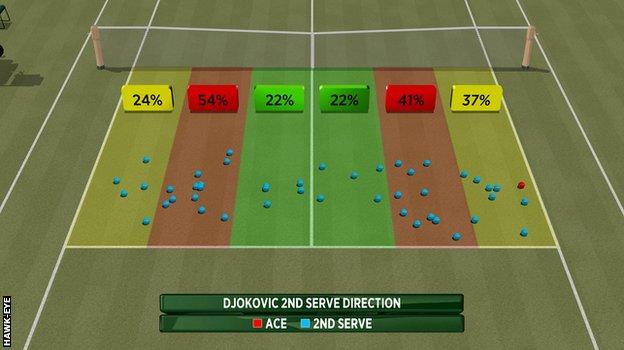