Sharapova, 28, has yet to drop a set at this year's tournament but was tested by unseeded 21-year-old Zarina Diyas of Kazakhstan before eventually progressing 6-4 6-4 in 97 minutes.

Dane Wozniacki, 24, was looking to reach the last eight for the first time but lost 6-4 6-4 to Garbine Muguruza. 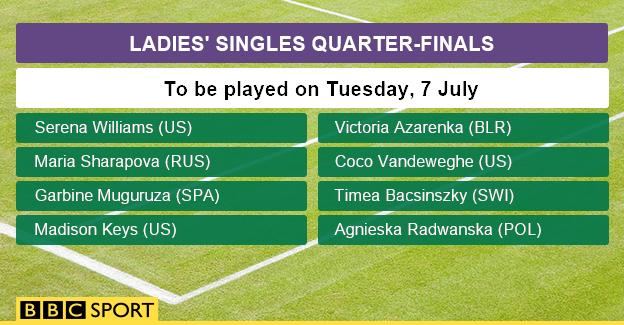 Vandeweghe booked her meeting with Sharapova with a surprise win over sixth seed Lucie Safarova.

Czech Safarova, 28, finished runner-up at the French Open this year but was outplayed by Vandeweghe, who won 7-6 7-6 to reach a Grand Slam quarter-final for the first time.

Two-time Australian Open winner Victoria Azarenka from Belarus eased past Switzerland's Belinda Bencic 6-2 6-3 and now faces five-time Wimbledon champion Serena Williams in the next round after her win over sister Venus.

The going gets tough for Sharapova

Sharapova's match against Diyas was her longest yet at this year's Wimbledon and she said it was her toughest challenge so far.

Diyas saved two set points in the first, and broke and held for a 3-1 lead in the second, before the Russian prevailed.

"The further you get, the tougher it gets, so I really had to be ready for her," Sharapova told BBC Sport.

"Coming into this tournament I didn't have a warm-up event, so I wanted to start off strong to give myself a good chance. I know it only gets tougher from here.

"It's a great position to be in. I lost at this stage last year so I'm happy to go a round further and I hope it continues."

With Williams, Keys and Vandeweghe progressing, it means there are three American players in the ladies' quarter-finals for the first time since 2004.

Jennifer Capriati, Lindsay Davenport and a then 22-year-old Williams were the last US trio to achieve the feat.