Britain's Andy Murray says he is wary of the threat from big-serving Ivo Karlovic, ahead of their fourth-round match on Monday.

The 6ft 11in Croatian, 36, tops the aces leaderboard with 136 at the tournament so far.

"It's mainly just the fact that he can hit so many of the angles on the court," said third seed Murray, 28.

"You can't just pat the return back into play, you need to try to do something with it, so it is tough." 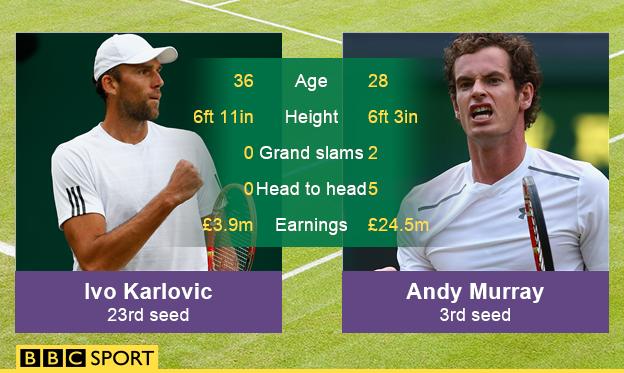 Karlovic, the 23rd seed, beat Jo-Wilfried Tsonga, winning three sets via tie-breaks, to set up the clash with Murray, but has never defeated the Scot in five meetings.

He is the oldest man to reach the last 16 at Wimbledon for 39 years - since compatriot Niki Pilic in 1976.

Karlovic took a set off Murray at Wimbledon three years ago, but felt he was "cheated" and accused officials of bias towards the Scot after being repeatedly foot-faulted.

Murray, the 2013 champion, beat Italy's Andreas Seppi in four sets on Saturday to secure his place in the fourth round.

He overcame a third-set blip which saw the Italian win six games in a row as Murray lost a set for the first time at this year's tournament.

The two-time Grand Slam winner says he needs to cut out the lapses of concentration in his matches which also saw him struggle in the second set of his first-round match against Mikhail Kukushkin.

"I just need to try to cut out those periods in the matches. Rather than have a 15 or 20-minute lull, make it a five or six-minute lull.

"You can't play at the highest level for three or four hours, you're always going to have little dips, but maybe they've been a bit too long this week."

Karlovic, who has won more points on his first serve than any other player in the opening three rounds, is optimistic about his chance against Murray.

The Croat said: "I feel good. It will not be easy against him, but if I continue serving like this, I will definitely have an opportunity."