Britain's Andy Murray reached the third round at Wimbledon with a one-sided win over Dutchman Robin Haase.

James Ward is also through to the last 32, but Aljaz Bedene could not make it three British men in round three.

Haase, ranked 78th, could not find anything like the form that saw him beat Murray in 2008, or more recently French Open champion Stan Wawrinka in March.

Murray, 28, was in confident mood on a rare appearance away from Centre Court, and did not suffer without a roof as early morning showers cleared in time for him to power through in one hour and 27 minutes.

"I am very happy with the way I played," Murray told BBC Sport.

"I felt there were things I could do better in the first round but today I did things much better. I felt like I dictated the baseline rallies."

The 2013 champion has won seven consecutive matches on grass this summer as he looks to repeat the double of titles at Queen's Club and Wimbledon that he managed two years ago.

Haase, 28, held confidently in his opening game but was soon under pressure, mistiming a forehand to drop serve in game three.

When Murray then sent a Haase smash flying back past the Dutchman for a winner, and followed up with a killer lob, the Briton had two breaks within quarter of an hour's play.

A heavy forehand into the corner gave Murray the first set in 20 minutes, and he had dropped just one point on serve despite a first-serve percentage of 38%.

Things got little better for Haase early in the second set as Murray manoeuvred him around the baseline, and the world number 78 fell 0-40 down before mishitting another forehand horribly.

The same wing let Haase down when a first break point came his way in the following game and Murray would not offer up another chance. 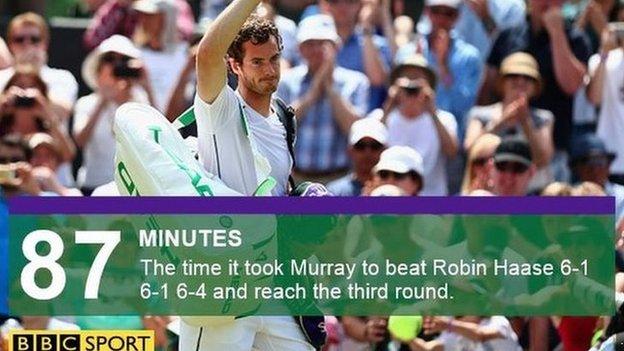 There was more resistance in the third set but Murray got the decisive break when Haase missed yet another forehand at 3-3 - his 24th unforced error.

For all the difficulties on show across the net, Murray was now in sublime form and three brilliant winners helped him see out the victory and earn an unusually early finish to his day.

"I started the match off very well and Robin was slow in the beginning," added Murray.

"He played better tennis in the middle of the second set and in the third it was the match I was expecting with some longer rallies.

"There are still nerves - that is good for me because I like it when I am nervous. I feel I give more attention when I am that way."