British number one takes on world number one as Heather Watson faces the might of Serena Williams in one of the highlights of day five at Wimbledon 2015.

Watson's task looks far from elementary when you consider Williams has won 20 Grand Slams, has been of top of the world rankings for more than two years and a sixth Wimbledon title would see her close in on a second Serena Slam of all four majors in the same calendar year.

In the men's draw, seventh seed Milos Raonic faces Australian bad-boy Nick Kyrgios after sending down the third-fastest serve in Wimbledon history in his last match.

Former champions Novak Djokovic and Maria Sharapova are in action again on what is expected to be another sunny day in SW19.

What to look out for on day five

Kyrgios has provoked negative headlines in his opening two matches, with the 20-year-old's on-court histrionics not well received down under.

While his temperament has been called into question, his raw talent has not and he loves the grass at Wimbledon.

Last year, ranked 144th, he became the first man outside the top 100 to beat a world number one at a Grand Slam since 1992 when he knocked out Rafael Nadal.

He went on to lose to Raonic in a hard-fought quarter-final so will be seeking revenge when they meet again on court two.

Kyrgios believes his 24-year-old opponent's booming serve is "the best in the game".

Those at the All England Club who police the strict all-white clothing policy will no doubt pay close attention to the attire of flamboyant American Bethanie Mattek-Sands on court 18.

The outspoken critic of the rule beat Ana Ivanovic, ranked 151 places above her, to set up a match with exciting Swiss youngster Belinda Bencic, who won in Eastbourne last week.

Three Brits are into the third round for the first time since 1999, when Tim Henman, Greg Rusedski and Danny Sapsford made it through.

Andy Murray and James Ward are back in action on Saturday, so Watson is up first as she attempts to make it into the second week of a Grand Slam for the first time in her career.

"Yikes - I never like playing the Brits at home," was Williams' response when she found out she was playing Watson.

Intriguing, as she has never faced a British player at Wimbledon in 84 singles matches at SW19, and has only done so once in her career.

The world number one last lost to a player ranked outside the world's top 50 in April 2014, when the 78th-ranked Jana Cepelova knocked her out of the Family Circle Cup.

But Watson is full of confidence going into a match in which she feels she has nothing to lose. "Do I believe I can beat her? Absolutely," said the 23-year-old from Guernsey.

The winner could face Serena's sister Venus in the next round. "Milos Raonic faces Nick Kyrgios and I'm going to call an upset. In the battle of the big servers, I think young Aussie Kyrgios has the baseline game to find a way to get past Raonic. As we've seen, his temperament is slightly volatile so look out for a few fireworks. Heather Watson has been presented with a great opportunity against Serena Williams and it is one she really deserves. Nothing to lose, lots to gain, she should go out there and enjoy the experience. In a two-horse race you can always win, but I think Serena will be too good for her. 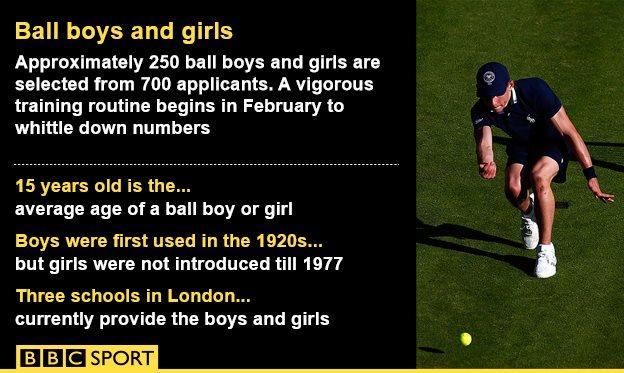 Wimbledon will be bathed in sunshine at the start of day five's play, with temperatures nicely placed in the early to mid-20s in Celsius.

Cloud is forecast in the afternoon, but mercifully there is no sign of rain. 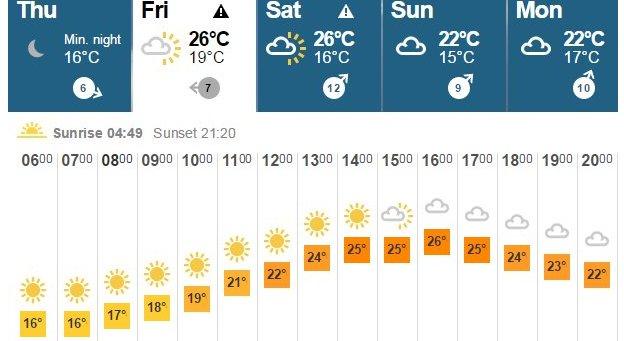