Britain's Liam Broady could not repeat his first-round Wimbledon heroics as he was comprehensively beaten by Belgium's David Goffin.

Broady saved three set points in the first set before losing it 7-3 in the tie-break, but lost the second set in rapid fashion as Goffin's superior ATP Tour experience began to tell.

The 21-year-old from Stockport was then broken twice more in quick succession in the third set, and although Broady saved match points at 0-5, Goffin closed out the match 7-6 (7-3) 6-1 6-1.

"I think obviously he's a very good player," said Broady, who earned £47,000 in prize money for reaching round two.

"It was a very tight first set, nip and tuck, which is very positive for me considering he's 15 in the world.

"I think the longer the match went on, the more fatigued I became, which is obviously again something to work on."

Wildcard Broady, ranked 182nd in the world, had battled back from two sets down on Monday against Australia's world number 138 Marinko Matosevic to win in five.

But there would be no repeat of those heroics from the British number six as he found Goffin's consistency and return of serve too much.

The home support on Court Three rarely got into full voice, the 16th seed accelerating away to move into Friday's third round with a straightforward win.

Broady will take much from his truncated week, however, not least a clear understanding of what he must add to his game to compete regularly at this level.

"I've absolutely loved it," he added. "It's been fantastic. I felt at home on court against David.

"But off the ground, it was gruelling as well. I have to get used to that because the very best guys play with incredible intensity."

Broady has not spoken to his father for three years after a disagreement about taking funding from the LTA.

"He's my dad, he'll probably keep track of the scores and stuff I'm sure, because I am his son at the end of the day," said Broady.

"I think it's best for me and for him that he stays away from the court." 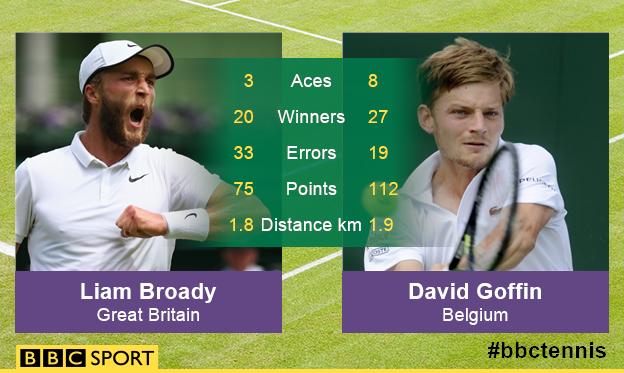