Former British number one Laura Robson believes she is capable of breaking into the world's elite as she continues her comeback from long-term injury.

Robson, once the world number 27, was knocked out of Wimbledon after a 6-4 6-4 defeat by Russia's Evgeniya Rodina.

The 21-year-old was playing her first Grand Slam match in 17 months, after returning at Eastbourne last week.

"I'm confident that I have ability to get back to where I was - if not higher," she said.

"It will still be a long process but I'm excited that I have another chance to do it. At 21 I have some good years ahead."

Robson reached her career-high mark in July 2013, dropping to 58th before being plagued by wrist and knee problems, but last appeared before last week at the 2014 Australian Open.

The Londoner suffered a 6-0 6-1 first-round qualifying defeat by Daria Gavrilova but, after proving her fitness, received a Wimbledon wildcard.

Some questioned whether Robson should have played in a Grand Slam after such little competitive tennis, but she insisted it was a "no-brainer".

"This is my favourite tournament of the year - my home tournament - and I could not imagine not playing it," she said.

"The disappointment of not playing here for two years in a row would have far outweighed not playing in smaller tournaments.

"I would have liked to played more matches before but it wasn't possible."

After the defeat by world number 101 Rodina, she added: "I've got no pain, no physical problems whatsoever."

Robson's inclusion in the main draw at SW19 was the right decision, according to former British number one Anne Keothavong.

"I don't think anyone expected Laura to produce her best form today and she certainly didn't herself," the 31-year-old former British number one told BBC Sport.

"The fact that she was out there competing and chasing down every ball was the main thing.

"I know there was some debate whether she should have been given the opportunity, but she totally justified her wildcard." 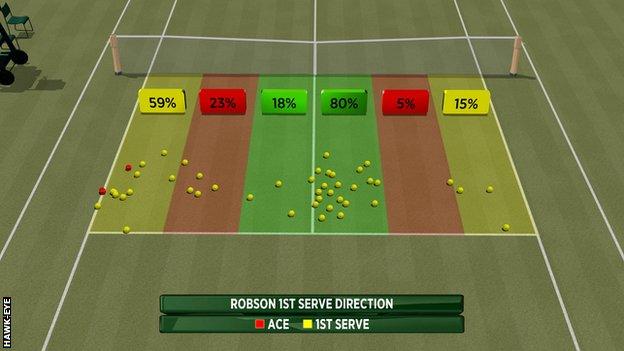