Britain's Andy Murray began his Wimbledon campaign with a testing win over Mikhail Kukushkin of Kazakhstan on a hot afternoon in south west London.

"It was a tough match. I made it hard for myself in the second set," Murray told BBC Sport.

It is the first time since 2006 that four British men have made the second round, with Murray going on to face Dutchman Robin Haase, who beat Colombian Alejandro Falla in four sets.

"For me, it's nice," Murray said of the British success. "I know all of them fairly well.

"I've obviously spent a lot of time training with James, really more the last 12, 18 months. Aljaz I don't know so well. Heather obviously had a good win today, too. Liam's a nice guy. He's good fun to be around.

"It's good for British tennis. The more wins and more players we can have in these events, it makes a difference."

Kukushkin, ranked 59th, went into the first-round match with no great form to speak of but tested Murray for an hour and a half and served for the second set.

"Towards the end of that second set I missed 10 or 11 first serves in a row, so I gave him the opportunity to be aggressive," added Murray.

"I wasn't surprised, I've seen some of the results when he has played on the big courts before. He's a tough player when he's going for his shots and making them.

"There's definitely work to be done for me. I felt like my opponent played well, credit to him. I'm glad to get it done in three sets because it's very hot."

With neither man able to fashion a break point in the opening half-hour, the first cracks appeared when the Kazakh double-faulted at 30-30 while serving to stay in the opening set.

A big serve and a backhand winner saw off two set points but Kukushkin went long on the third as Murray pressed.

When Murray broke again early in the second set he finally appeared to be in control, but his form dipped along with his first-serve percentage, which fell to about 40%. 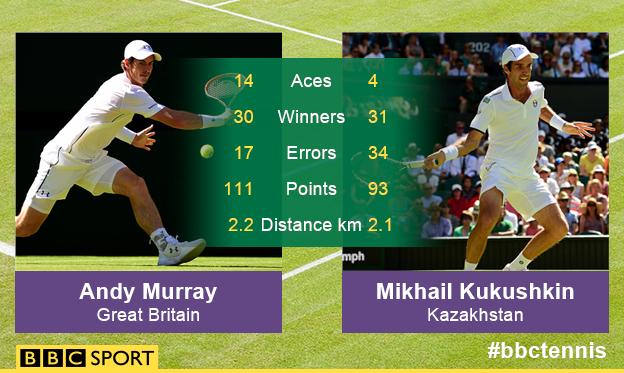 Twice he lost leads - the second time when serving for the set - as Kukushkin's attacking intent kept Murray on the defensive behind the baseline.

Kukushkin, 27, won four straight games to earn a chance to serve for the set but from 6-5, 30-0, the errors returned and Murray capitalised to level.

A brilliant running forehand then gave the world number three an early lead in the tie-break and he converted his third set point when Kukushkin fired long.

There was no great collapse from the outsider in the third set but Murray was now threatening more consistently with his return, leaning into a backhand to break at 2-2.

The danger seemed to have passed but Murray was given another scare when trying to close out the match, slipping 15-40 down, and he had to dig deeper than expected to see out a straight-set win.