Andy Murray made a winning start to his grass-court season with a straight-sets win over qualifier Yen-Hsun Lu at Queen's Club.

The Briton won 6-4 7-5 at the Aegon Championships and will play Spain's Fernando Verdasco in round two.

Murray, the top seed and a three-time champion, fell behind in both sets but came through in one hour and 19 minutes.

"But it's an extremely strong field this year, stronger I think than any years previously, so I'm going to have to play good tennis if I want to do well this week."

On a day when Rafael Nadal made a shock early exit, Murray avoided a similar fate despite some edgy moments against Lu.

The 31-year-old from Chinese Taipei is ranked 63rd but made it through qualifying and can point to a Wimbledon quarter-final appearance on his CV, albeit five years ago, and a win over Murray at the Olympics in 2008.

Lu certainly looked at ease on the grass as he broke serve in game five with a running forehand pass, jolting Murray to life.

The Scot, 28, broke straight back and appeared to have the match under control when a Lu error gave him the set.

There were signs of rustiness, however, when Murray let a 40-0 lead slip at the start of the second and Lu consolidated for a 2-0 lead.

With Swede Jonas Bjorkman - on coaching duties this week - watching from courtside, Murray hauled himself level again at 2-2 with a forehand into the corner. 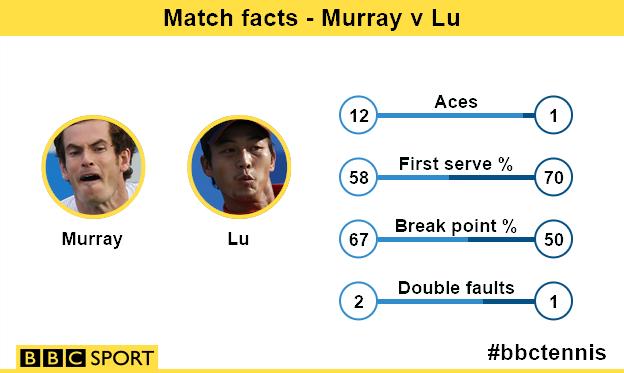 With serve then holding sway, a tie-break loomed and the possibility of a third set, but Murray averted that danger at 6-5 by taking his first match point with a forehand lob.

"I felt like I moved pretty well," Murray added. "I didn't start the match off serving so well but I got that rhythm more in the second set.

"I felt like I hit the ball well from the back of the court but could have served a bit better today."