It's great to have a long spell living at home but for an athlete it's important above all that you stay on the right path.

The chance to enjoy home cooking, eat all the things you like, watch all the TV you want, have your friends around and hang out with them - it's good but you've got to be careful.

That's the case more than ever this year because, with the extra week after the French Open and then the Davis Cup tie after Wimbledon, I'll be here for about seven weeks.

That's as long a stretch as I can remember, aside from when I was injured with my back.

It's important to keep in mind that there are a lot of big matches and tournaments to prepare for, and then after that straight it's the US summer.

It is nice to be at home though. One of the things that's great about travelling is you get to try new food but there's nothing like coming home and being able to eat the things you really love.

When I get back from a trip away the first things I look for in the fridge are these fruit yoghurts. They're lactose free but that's not why I eat them, I just love the taste.

Sometimes I'll pick stuff up on my way home but my mother-in-law was the last one to go to the supermarket when she stayed with us for a few days. She went out and got a few things, so the fridge is well stocked!

If the fridge is full, there is usually space in the TV planner. 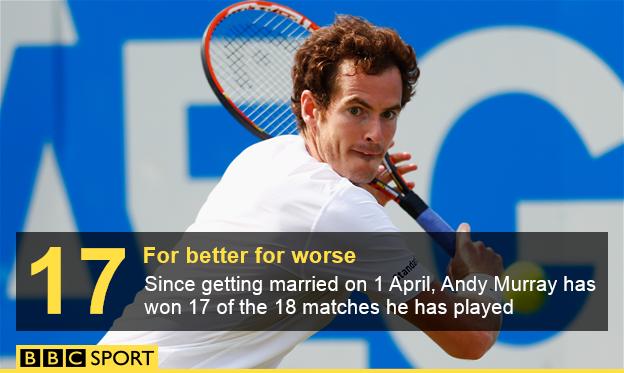 Mock The Week has started again, so I watched the first episode last week and the other day I saw there were a bunch of Christmas specials on. Strange time of year for them, but I love the show, so I was pretty happy!

The new series is always on around this time of year though and I enjoy watching that.

There aren't too many arguments over the remote control because we both watch Mock The Week, but other than that I don't really watch loads of TV, especially now the Premier League has finished for the season.

Kim watches Game of Thrones but I saw the first episode and couldn't get into it. Some of the scenes in that first episode were full on!

My team has changed a bit over the past year, so I thought I'd give you the lowdown on who is with me this week at Queen's.

Matt Little, physical trainer: Me and Matt wind each other up a lot. He's pretty loud at the side of the court - he's loud everywhere to be honest. His nickname is Treacle because he used to say to Kim, "All right, Treacle?" We then started turning it back on him.

I've been working with Matt for eight years or so and we know each other very well. He's a very loyal person on and off the court.

Shane Annun, physio: I started working with Shane after Wimbledon last year - the first tournament was Vienna. He used to work for the LTA and he still does the Davis Cup, which is where I met him. He's a Spurs fan, an unbelievably nice guy.

Jonas Bjorkman, coach: Jonas is calm. He's played so many matches and been around the game for so many years that he's very experienced. I think he'll be able to help everyone.

It's good to have people who have experienced big matches and can help the rest of the team with that. Wimbledon is always a little bit different compared to other tournaments because there are a lot of demands on me, more pressure and stress.

Having people like Jonas and Amelie Mauresmo around can help everyone through those weeks. I'm very happy with my team right now and am looking forward to playing on the grass this summer.