Rafael Nadal and Novak Djokovic are on course for a French Open quarter-final meeting after both reached the third round in straight sets.

World number one Djokovic beat Luxembourg's Gilles Muller 6-1 6-4 6-4, despite treatment on his lower back.

Going long on Court One

The match featured 206 points - more than double the 95 that made up Irina-Camelia Begu's 6-2 6-0 win over Croatia's Ana Konjuh earlier in the day - and is the third longest women's singles match in French Open history.

The pair have form for lengthy contests.

At the 2011 Australian Open Italian Schiavone beat her Russian opponent 6-4 1-6 16-14 in four hours and 44 minutes, setting the record for the longest women's match in Grand Slam history.

Djokovic laid back over injury

Top seed Novak Djokovic, who is hunting a French Open title that would complete his collection of career Grand Slams, extended his 2015 record to 37 wins from 39 matches with a routine victory over Muller.

Despite receiving lengthy treatment after a fall during the match, the Serb is confident that injury won't hold him back against Thanasi Kokkinakis in the next round.

"Thankfully it's nothing serious, really," he said.

"I slipped a lot and felt pain in the right leg, but I'm not worried about it."

Australian Kokkinakis became the first teenager to reach the men's third round at Roland Garros since Ernests Gulbis made the quarters in 2008.

The 19-year-old beat compatriot and 27th seed Bernard Tomic in a five-set thriller, winning 8-6 in the fifth.

"I've never done that before," Tomic said of the jabs. "Hopefully, that will get rid of the area that has been bothering me. But I have no idea about this stuff.

"I had a bunch of match points this year. If I had converted them all I probably would have been close to the top 20 or even top 20 now, for sure,'' said the current world number 26.

Sweden international and Paris St-Germain striker Zlatan Ibrahimovic took time out from his day at Roland Garros to have a selfie taken with a fan.

Ibrahimovic will hope to help PSG complete a treble when they play Auxerre in the Coupe de France final on 30 May - he doesn't look too worried though...

Vogue editor-in-chief Anna Wintour took up her seat early on Philippe-Chatrier to catch Goerges' win over Wozniacki in the first match of the day.

Perhaps she was drawn by the players' sartorial imagination with both in shades of yellow, defying the trend for black and pink that has dominated the locker room so far in the tournament.

"You fight, you fight, and then you are reaching the mountain, but you go back and you are again down. Then you fought, you go up. It's tough. You are there and go again. So when you arrive there, you think about how is going from there to here. So you keep going for one metre more. You need just one metre more." Francesca Schiavone on her marathon win over Svetlana Kuznetsova, the third longest women's singles match at Roland Garros.

"Obviously she has given me trouble in the past and she gave me trouble again today. So that kind of sucks." Fifth-seeded Caroline Wozniacki after her loss to Julia Goerges.

"I had Korean barbeque last night and it was delicious, and I have French toast for breakfast ever morning." Sloane Stephens details the highlights of he stay in Paris away from the court.

"Maybe in a couple of years I'll look back and I'll be like Maria where she felt like, what was it, an ice skating cow or hippo or something." Madison Keys is struggling for the famous Sharapova description of herself as "a cow on ice" when playing on clay.

"If I decide to play, I hope that one of the two tournaments can grant me a wildcard. I will be very thankful. I will be grateful for that. If not, I will play doubles, I guess. Maybe. Or qualies. Sign up for qualies." Novak Djokovic sets hearts fluttering at grass-court warm-ups Queen's and Halle.

"In the world of sport, in the world of football, in the world of tennis, politics, around the world, we need people who are fair and who are ready to work in a good way, being honest. If there are some people that are not being honest with the rest of the people, then they don't deserve to be where they are. So if that's what happened on that case with some people of Fifa, it is great news that these people will not be there again." Rafael Nadal talking about corruption claims made against football's world governing body, Fifa.

"He's Australian, they have got everything out there, he is used to it all!" Jamie Murray reacts to doubles partner John Peers' claim not to have any phobias at all.

Former British number one Anne Keothavong, now working as a media pundit, grabs Victoria Azarenka for a quick snap after the Belarussian's win over Lucie Hradecka of the Czech Republic. 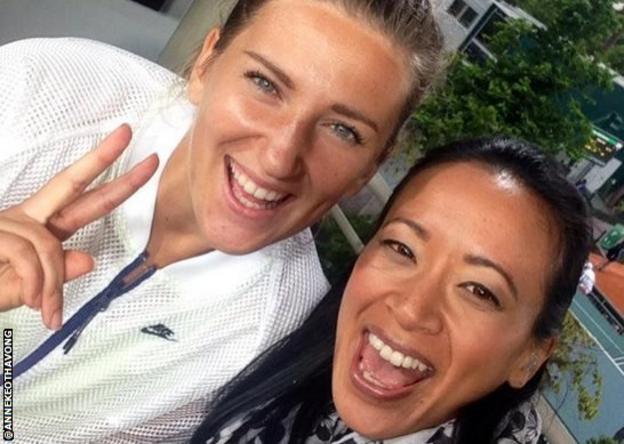