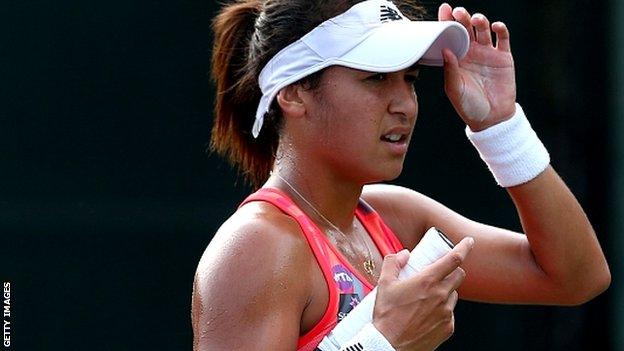 The Briton twice led by a break in the final set and had looked on course for victory serving at 4-3, 40-0.

Watson, 22, went into the match with 10 wins and a WTA title to her name this year but dropped serve immediately and could not recover in the opening set.

The Briton's situation was becoming dire by the time Vekic moved 4-2 clear in the second, but the Croat crumbled with three double faults in a single game as she was broken, and then failed to capitalise from 0-40 on the Watson serve.

Watson took advantage to complete a four-game sweep and level at one set all, and then dragged Vekic out of position to break for 2-1 in the decider.

There were more twists to come, however, with Vekic calling for the trainer three times as she suffered with cramp in her foot, only to recover two breaks - the second from 40-0 down - with some fearless hitting.

Watson was faced with serving to force a decisive tie-break but Vekic kept up the attack and broke to love, clinching victory with a backhand winner.