The five-time champion, who has not been past the last eight since 2010, breezed through the first set, but was put under pressure before prevailing.

Stan returns as the man

Wawrinka enjoyed the experience of walking out on to Rod Laver Arena as the defending champion but after a week in Melbourne, he feels ready to focus on the "new tournament".

"It was great," said the Swiss. "I was happy to be back on the court. I can feel that I have a lot of support here, and it's always nice to come back like that and to feel the crowd behind you."

Djokovic had suffered with an illness that restricted his practice time at Melbourne Park, but the world number one believes he is now up to speed.

"It has been a rough couple of weeks but it is behind me now," the Serb said. "I'm proud of how I responded."

Tough at the top (of the draw)

There is always a part of the draw that is best avoided and this week it has thrown together two-time US Open finalist Caroline Wozniacki and two-time Australian Open champion Victoria Azarenka in round two.

"I've known her since juniors, I think back when we were maybe 13, when she was 14, somewhere around that," said Wozniacki. "We've competed for a very long time. So we go way back."

After Li Na's announcement on Monday that she is expecting a baby, Tuesday's feel-good story came on the banks of Melbourne's Yarra river.

Tomas Berdych announced his engagement to Ester Satorova at Melbourne's Royal Botanical Gardens before posing for the cameras.

It's back to the day job on Wednesday for Tomas, when he takes on Jurgen Melzer in the second round.

"I'm a little sad. I'm going to have my Stevie G jerseys hanging somewhere. Unfortunately he won't be playing there any more. I'll have to make a trip probably to L.A. to have a look again. But 17 seasons, it's a long time." Liverpool fan Caroline Wozniacki is coming to terms with the departure of Steven Gerrard.

"My wife says I'm pretty good. I can't say more than that." Novak Djokovic passes the buck on the nappy-changing question.

"I don't know. I'm still growing up. It's like the biggest job in the world. As much responsibility as I've taken on in my life, that still seems daunting." Venus Williams was also asked about parenthood, and if she would like to be a mother, after former champion Li Na announced her pregnancy.

"Next question, really." Milos Raonic refuses to bite on fellow Canadian Eugenie Bouchard's suggestion that he is obsessed by his hair.

"I have like a ratio, not over 20 fist pumps or under 15. There has never been a statistic about fist pumping. I think you guys could have some fun with that." Victoria Azarenka reacts to a claim that she reached a new level of fist pumping in her win over Sloane Stephens.

Maria Sharapova is left hanging by her hitting partner. "Someone doesn't like #selfies. Oh well," she tweeted. 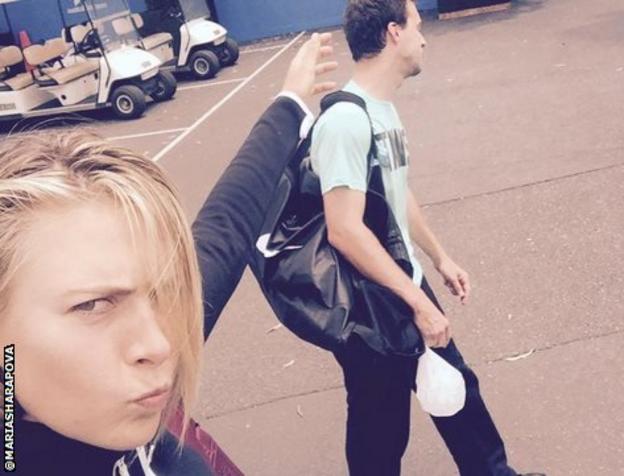