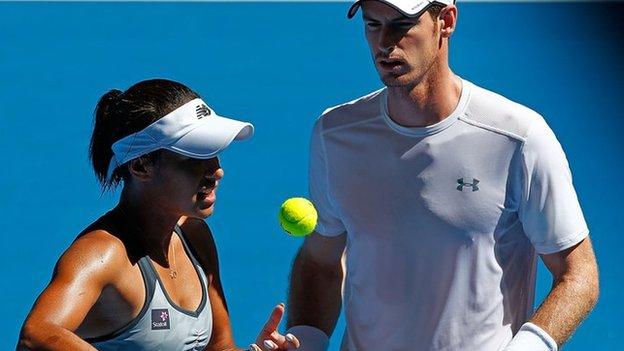 Andy Murray and Heather Watson won their final matches but Great Britain were knocked out of the Hopman Cup.

The pair beat Casey Dellacqua and Marinko Matosevic 7-5 6-1 to seal a 3-0 win over home side Australia.

The format guarantees all the players at least three singles matches as they prepare for the Australian Open, which begins in Melbourne on 19 January.

After straight sets wins over Janowicz, France's Benoit Paire and now Matosevic, Scot Murray was pleased with his week.

"I think I have played well. The scorelines have been quite convincing against good players and tricky players who are big hitters of the ball," he said.

"Paire is quite an unpredictable guy to play against and then Janowicz and Matosevic are big and strong guys, but I felt like I neutralised a lot of their power well and moved forward, and stepped up the court well when I had the chance. It was a good few matches."