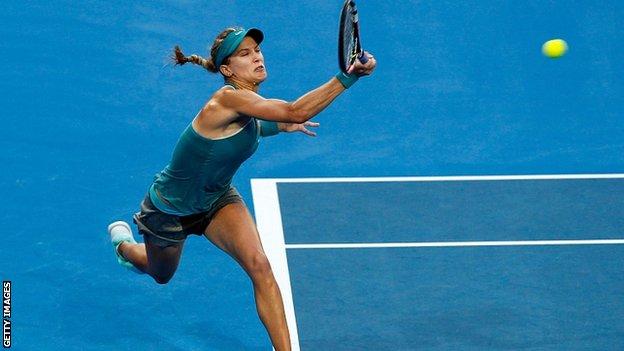 Canada's Eugenie Bouchard dropped just three games in a stunning win over world number one Serena Williams at the Hopman Cup in Perth.

Bouchard, the world number six, won 6-2 6-1 in 50 minutes to give Canada an early lead over the United States in the mixed team event.

Having required an on-court espresso to get her going in her opening match on Monday, Williams again looked sluggish.

"It's weird. I can't get my body to move. I feel like I've got no energy. It's a little frustrating because I know I can play two thousand times better.

"I've been trying to rest up. I did a little gym work, but I just felt depleted. I don't know why. I don't know how to describe it.

"I've just got to get my feet moving. I have to figure it out. Hopefully I can do better in the next match."

The American will play Lucie Safarova of the Czech Republic in her next singles match on Thursday.

Bouchard enjoyed her first-ever win against Williams, and joked afterwards: "Maybe she needed another coffee.

"I know she didn't play her best. I'm happy I just stayed with it and held my nerve. It's a good way to start the year - it gives me some confidence."

"It certainly felt good to start, after not playing a match for a couple of months," said the 27-year-old Russian.

"Despite all the training, it's such a different feeling to go out on the court and play in front of a crowd."