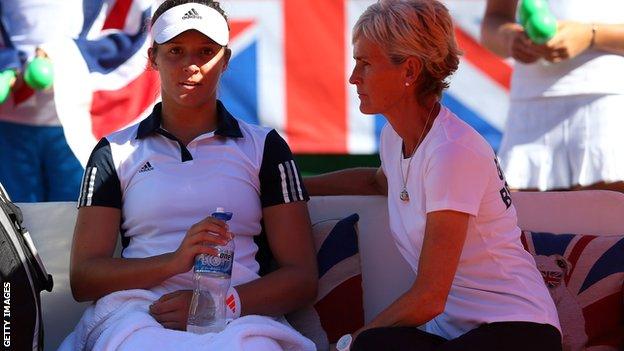 Great Britain will have to cope without Laura Robson for the second year in a row when they attempt to qualify for the Fed Cup World Group in February.

The former British number one has been out for a year with a wrist injury and has not been selected for the Euro/Africa zone qualifiers next month.

Fifteen nations will compete for two places in the World Group II play-offs.

Robson peaked at a career-high 27 in the world two years ago but has not played since last year's Australian Open, and plans to return next month on the second-tier ITF circuit.

Britain reached the World Group play-offs in 2012 and 2013 with Robson in the team, but in her absence Judy Murray's team in the Budapest event last year.

Watson and Konta will again lead the singles challenge, while Smith is brought in for the first time to partner Rae in the doubles. The pair reached a WTA final in Sweden last year and share a world ranking of 91.

"We are fielding our best two available singles players and a recognised and very promising doubles team," said Murray.

"I believe this represents our best chance for success in a three-rubber match format where we could end up playing four countries in four days‎.

"The current Fed Cup format only allows home and away ties for the teams in the World Groups, so we must get to that stage in order to be able to use the event to stimulate more interest in British women's tennis."