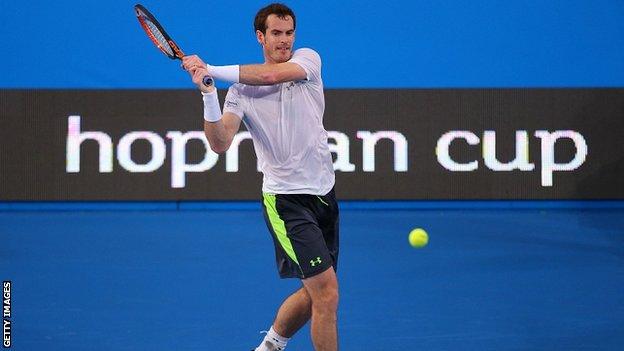 Andy Murray made a winning start to his Australian campaign as Great Britain beat France 2-1 at the Hopman Cup.

On a day when the temperature in Perth peaked at 44C, Murray beat Benoit Paire 6-2 7-5 to give Britain an early lead over France at the mixed team event.

Britain will play Poland on Wednesday and Australia on Friday, with the group winners reaching Saturday's final.

The format guarantees all the players at least three singles matches as they prepare for the Australian Open, which begins in Melbourne on 19 January.

"It was a bit of an eye-opener when we arrived at the practice court this morning and it was 44 degrees outside," said Murray, who arrived in Perth on Sunday after winning an exhibition event in Abu Dhabi.

"I'm from a small town in Scotland and the weather is not quite like that there. The conditions here are fantastic to get ready for Melbourne."

Murray, 27, had felt soreness in his left shoulder during the Abu Dhabi event and admitted he was still dealing with the issue.

"I had the problem in Abu Dhabi a couple of days ago and haven't had much time to serve after that," he said. "We flew straight from there and arrived yesterday.

"It doesn't really make sense for a right-handed player to have a problem with their left arm. So I am not sure exactly what it was and I had a scan in Abu Dhabi and that was all clear.

"But it's still a little bit sore today."

World number one Serena Williams began her season with a victory in Monday's opening tie as the United States beat Italy 3-0.

The 33-year-old made a dreadful start against Flavia Pennetta, dropping the opening set to love, but after asking for a coffee at the changeover she stormed back to win 0-6 6-3 6-0.

"I'm so jet lagged and Flavia played really, really well and yeah, everyone needs coffee every now and then," said Williams.

"I am a coffee drinker. I didn't have mine this morning and I was just feeling it, so I just had to get some coffee into me.

"I just asked them to get me a shot of espresso. I asked them if it was legal, because I've never done it before."