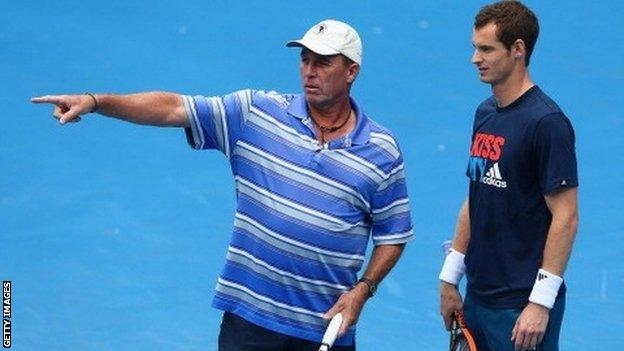 Ivan Lendl says he is "proud" of his work with Andy Murray and expects to return to coaching in the future.

The Czech-born American helped Murray win Olympic gold, the US Open and Wimbledon before they parted in March.

Lendl, 54, could not commit to the amount of travelling required but sees himself returning at some stage.

"I've had a lot of enquiries," he told BBC Sport. "Eventually, when the time and situation are right, I enjoyed it enough that I will do it again."

Lendl, a former world number one and eight-time Grand Slam champion, admitted the travelling issue was the main drawback to taking up another role.

"There are so many things to coaching which I don't enjoy: the travel, the airports, being on the road for so long," he said.

"I don't like doing anything in half-measures, so in order to do it properly it takes a lot of time. That's the hardest part."

Tomas Berdych, the world number seven from the Czech Republic, spoke last week about his wish to work with Lendl.

"I think it's something which I was thinking about, definitely," said Berdych.

"I think it just needs probably the right time and timing to make it happen. Let's see. I hope for the time it's going to come up. Fingers crossed."

Lendl met Murray and his team in New York a few days before the start of the US Open, in which the Briton went on to reach the quarter-finals before losing to top seed Novak Djokovic.

"I think Andy needs to win some matches to get some confidence, that's the key there," said Lendl.

Asked about his time with the Scot, he added: "I enjoyed it. It obviously was difficult at times in terms of travel, which I don't like doing, but I'm really glad that we got together and that Andy had the success he had.

"I'm very proud to be a little part of that."

The success of their partnership sparked a trend in men's tennis for famous names of the past to return as coaches.

"I don't think that it's a coincidence, I really don't," said Lendl.

"I always felt that one of the biggest attributes of Tony Roche coaching me for 10 years, what he was giving me was the knowledge of what it feels like to be on that Centre Court on Sunday afternoon.

"He has done all four of them, been in all four finals. I don't care how good a coach you are, it's very difficult without having done it yourself.

"It's so different walking out there on Sunday or Monday for the finals, and even the semi-finals, if you have someone you can talk to about your feelings."