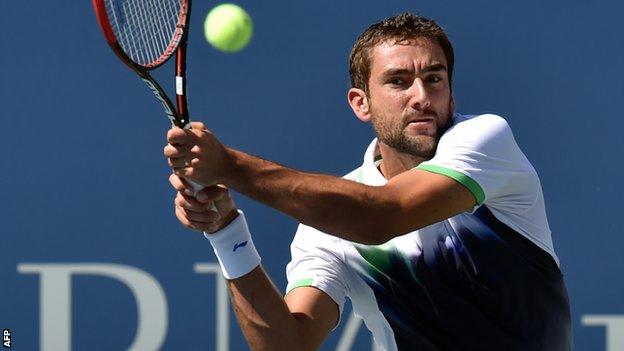 Marin Cilic dismantled an out-of-sorts Tomas Berdych in straight sets to reach the semi-finals of the US Open.

The Croat, 25, into the last four of a major for the second time, now faces five-time champion Roger Federer.

Berdych, the sixth seed from the Czech Republic, said: "It was horrible from the beginning."

The 28-year-old had been broken only four times in the tournament prior to the quarter-finals, but struggled with the windy conditions to surrender his serve in the very first game of the match thanks to two double faults.

A second break was immediately recouped, but when another double fault saw Berdych lose his serve once more, Cilic sealed the set with a third ace.

That would be a sign of things to come for Berdych, as the Cilic serve dominated the second set.

The world number 16, who missed last year's tournament because of a drugs ban, won all but one of the 17 points when he landed his first serve, capitalising on a solitary break earned in the opening game.

Berdych looked to be mounting a fightback - earning a break early in the third - but was angered when the umpire rightly ruled he had failed to return a Cilic backhand before the ball bounced twice.

From 30-15 up, Berdych was broken and was unable to make another impact on the Cilic serve, as the Croat took the match on a tie-break to reach his first Grand Slam semi-final since the 2010 Australian Open.

"It was a truly amazing day for me," said Cilic. "It was very gutsy in difficult conditions.

"I adjusted better than Tomas and I could rely on my serve. I played pretty good tactically and I am pretty happy with everything."

"I've had tough times over the last couple of years and I'm really happy that things are working out. I'm enjoying my time on the court."

The Bryan brothers, who until last year's US Open held all four Grand Slams as well as Olympic gold, were pushed all the way by the unseeded Lipsky and Ram.

The Bryans have not won a major since Wimbledon 2013, but now meet Spanish pair Marcel Granollers and Marc Lopez for their fifth US Open and 100th career title.

Hingis, now 33 and in a second comeback from retirement, reached her first Grand Slam doubles final in 12 years.

At the 2002 Australian Open, in the company of Anna Kournikova, the Swiss won the last of her nine doubles crowns to add to her five singles titles.

Hingis last reached a doubles final in New York in 1998, when she partnered Jana Novotna to success.

"There was so much tension and nerves out there as I don't know how many more chances I will get to play again. I enjoy every second," she said.

Maia Lumsden and her Hungarian partner Fanni Stollar made it to the semi-finals of the girls' doubles after their quarter-final opponents Olga Fridman and Jelena Ostapenko withdrew. However, British pair Freya Christie and Katie Swan were beaten by Vera Lapko and Tereza Mihalikova 6-4 3-6 (10-4).

"Are you serious or have you spent too much time in the sun? Have you ever had a racquet in your hand? You should get at least a penalty for such a call like this. It's a terrible call. It's impossible you have two bounces on a shot like this. You never have a clue about tennis." Tomas Berdych gets hot under the collar about the umpire's correct call on a double bounce.

"I think it's something which I was thinking about definitely. I think just needs probably the right time and timing to make it happen. Let's see. I hope for the time is going to come up. Fingers crossed." Once he calmed down, Berdych admitted he may work with Andy Murray's former coach Ivan Lendl.

"It's special, but I'm not thinking all the time I'm in a Grand Slam against Serena." Ekaterina Makarova, who has also reached the women's double semi-finals, is not all consumed by her singles semi against Serena Williams.

"It's so easy now because it's almost a joke for me because I have done little to no winning in the majors. And I thought, 'Take it as a joke. Oh my God, I'm past the fourth round. Woo'. I'd better play doubles just in case I don't make it past the second round. At least I have a back-up plan." Serena Williams takes a relaxed approach to her meeting with Makarova.

"I talk with her more in Spanish than in Italian because she's boyfriend is from Spain. (Martina slaps Flavia.)" The official transcript for Flavia Pennetta and Martina Hingis raises more questions than answers.

"You know Goran, so Goran is everything but not boring." Marin Cilic assures us that coaching has not changed Goran Ivanisevic.