Jo-Wilfried Tsonga will go into Monday's US Open fourth-round match against Andy Murray boosted by the Briton's uncertain form.

Murray has not won a title or beaten a top-10 player since Wimbledon in 2013.

Tsonga has a 2-9 record against the Scot, but ended a six-year losing run in Toronto earlier this month.

"The locker room is maybe a bit less afraid of Andy because he's losing a few more matches than in the past," he said.

"But I don't know any player who once on court is going to be super-confident against Andy.

"And during matches he's showing more when he seems in pain with his back or hip region. You can see it on some moves, too."

The pair are scheduled in the third match on the main Arthur Ashe Stadium at around 20:00 BST, with a hot, humid and potentially stormy afternoon predicted in New York.

It is four years since Murray last failed to reach the quarter-finals at a Grand Slam in which he competed, and his dominant record against Tsonga could have been even better had he converted a lead in the final set of their recent match in Canada.

Asked how concerned he was by his failure to beat a top-10 player for 13 months, Murray, seeded eighth, said: "Not as much as you guys would think. 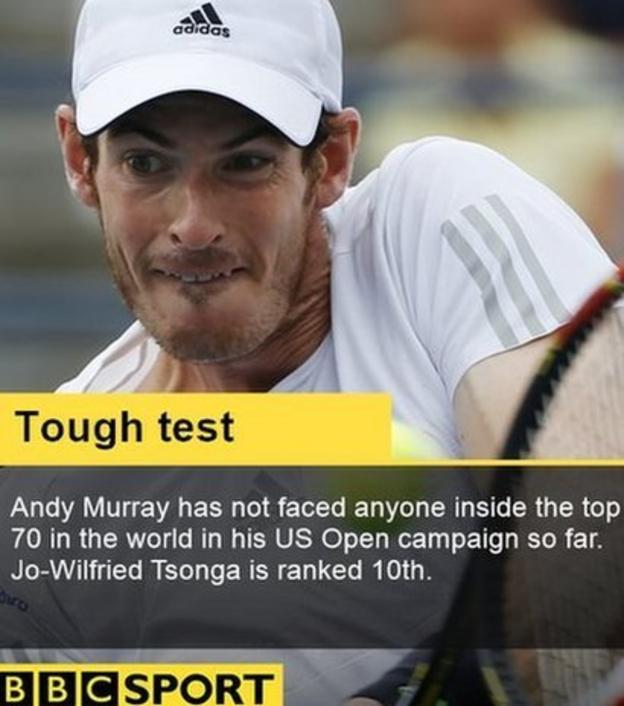 "I've beaten many top-10 players over the course of my career in these events, so I'm sure it will happen soon and I hope that's the case on Monday."

He added: "I've had good results against Jo in the past. I lost to him a few weeks ago in Canada but I won against him a few times in a row before that.

"We grew up playing in the juniors and we've played 11 times on the tour, so I know his game pretty well."

The 2012 US Open champion has made a habit of letting strong positions slip in recent matches but he remains focused on results ahead of performances.

"It's not really about how you play, because sometimes you can play really good tennis and lose," he said.

"I'm more interested in trying to win the match against Jo, playing the right tactics to give myself the best chance of doing that."