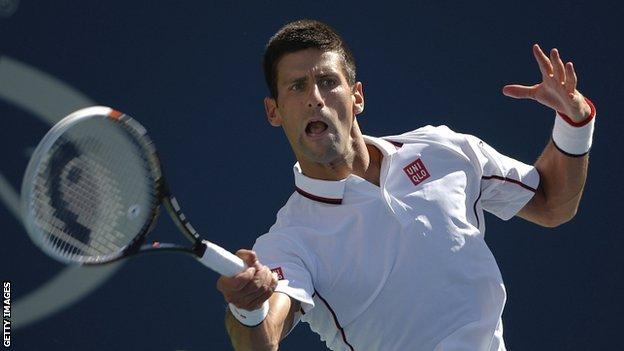 Top seeds Novak Djokovic and Serena Williams are through to the third round of the US Open after both secured straight-sets victories on Thursday.

Djokovic, champion in 2011, needed only one hour and 28 minutes to progress and will play American Sam Querrey next.

Five-time champion Williams will play Varvara Lepchenko of the United States for a place in the last 16.

Tenth seed Kei Nishikori of Japan is also through to the third round after Pablo Andujar of Spain retired with the score at 6-4 6-1.

"Not knowing when I would be able to play, that was the hardest part," said Azarenka, who has struggled with foot and knee injuries this season.

"But I just want to talk about the positive things. She started really well, was hitting her targets and I was on the back foot. But eventually I got my momentum,"

"It's so hard to play in the wind," said Williams, who nevertheless hit 25 winners. "Getting through that game was really important. You have to be able to adjust."

"It's very windy, but I managed to adjust to the conditions," said Djokovic. "I managed to play better in the important moments, play solid, use my serve efficiently - with accuracy rather than speed.

"[Querrey] has a big serve. On any surface, if he serves well he's dangerous to play against."

"I had to battle in the third. I just believed in myself and told myself to keep fighting," said Bouchard after two hours 17 minutes on court.

"I want to play better tennis in the next round but at least I have that chance."

"I really struggled to find my rhythm and made way too many unforced errors," said Ivanovic, who has won three tournaments this year. "It was just a really bad day.

"I had great lead-ups to every Grand Slam this year. I won a lot of matches, big matches as well. At the Grand Slams I just haven't performed that well. It's something that I'm definitely going to work on."

Murray, who smacked his racquet in anger after losing a match point, enjoyed success later in the day as he and Australian partner Casey Dellacqua beat Elina Svitolina and Florin Mergea 3-6 6-1 (13-11).

The kids are alright

While the grand names of tennis were gracing the stadium courts on day four, it was the next generation creating the buzz around Flushing Meadows. Croatia's very hotly tipped 17-year-old Borna Coric played a man twice his age in Victor Estrella Burgos, with the man from Dominican Republic prevailing on a feisty Court Six.

Right alongside them on Court Five, 19-year-old Aussie Nick Kyrgios was showing why some experienced eyes see him as the best of the crop as he beat Italy's Andreas Seppi in straight sets. And the evening drew to a close with 15-year-old American CiCi Bellis falling short in three raucous sets on Court 17 against Zarina Diyas of Kazakhstan.

"If keep having fun, I guess, I can make an impact," said Kyrgios.

Sam Querrey is asked to compare Roger Federer and Serena Williams: "I mean, one is a man and one is a woman. I don't know.

"They're just both great champions, both confident players, both have dominated the game for years. I mean, I really don't know. And I don't care that much, honestly. Sorry."

Andy Murray is asked if he could imagine playing for Scotland at Rio 2016, with the Scottish referendum looming. "If it happened where, if Scotland became independent, then I imagine I would be playing for Scotland, yeah. I haven't thought much about that yet because I don't think it's looking too likely that it's going to happen."

"I was like at 81% when I got here. I don't know how it died so quickly. I mean, I wasn't on it too much." She might be a superstar in waiting, but CiCi Bellis uses the 'my phone died' excuse just like everyone else.

"I don't think there is anything wrong. Actually, I think it would be wrong if my tennis is in front of my baby and my wife. I think there is no question about it." Novak Djokovic clarifies his comment from before the tournament that 'tennis is not number one any more".

Serena Williams reflects on her collections of Grand Slam titles: "I'm kind of stuck right now at 17, which to be honest is not a bad number to be stuck at. It's better than 16."